Due to the success of our debut dumpling class at the Welcome Centre, we were invited back in the new year to continue our folding and chatting sessions.
This time we thought we would  make the delicious Jiaozi (??). These dumplings originate from China and are traditionally eaten on the eve of Chinese New Year. They take many different forms; their filling, shapes and cooking method varying from province to province.

Having spent three years living in China, I was invited to many households for dinner and would inevitably end up as part of the dumpling making process. It is incredibly difficult to choose a favourite dumpling, but my fondest dumpling memories were in the far North Eastern part of China, in Jilin (??) Province. Winters in this region reached -27 degrees celsius so the need for warmth was a priority. My friend Roma and I would huddle into one of the many dumpling restaurants and defrost ourselves over large steaming plates of boiled Jiaozi. We would eat them with sweet vinegar and crushed fresh garlic, washed down with a pot of jasmine tea. I always remember the windows completely clouded over with condensation and conversations.
I wanted to bring that nourished feeling I experienced in China back to the women at our session. A large part of the population in Cheetham Hill are Muslim. Because the ‘default’ meat in China is pork, I looked to the North where the Mongolian influence on cooking is strong and lamb becomes a staple in many dishes. This way we were able to create a dumpling everyone could enjoy. Please try the recipe yourself and let us know what you think. 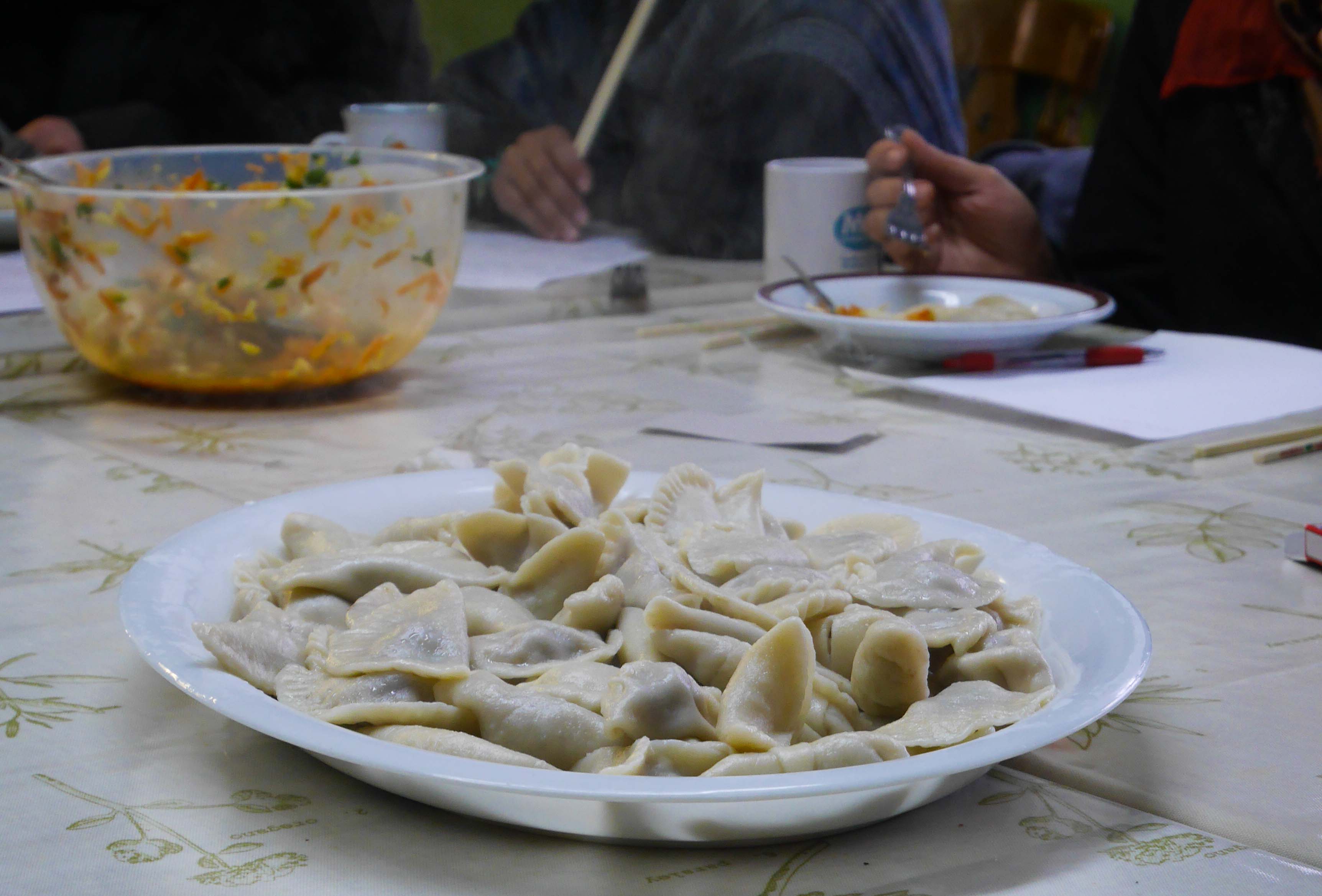 Although the feedback from our first session had been overwhelmingly positive, we still had our visions of what we felt was needed to make the sessions more effective. Sitting down after and reflecting on all the details, we picked out a few timing and content issues. We had packed in an English lesson and dumpling session side by side. There was hardly any time to just chat, fold and relax. In addition, a lot of the women were interested in the filling we had pre-made. They really wanted to see how to do it.  As a result, we  came up with a slightly altered session structure for session two: not only were the women were going to see the whole process of making the dough and the filling, but they  were now going to be part of that too. This would save on time and be more engaging for the women during the process. We also had two superb volunteers, Halina (pictured in the red apron below) and Nola (who took all the pictures) to give us extra support. 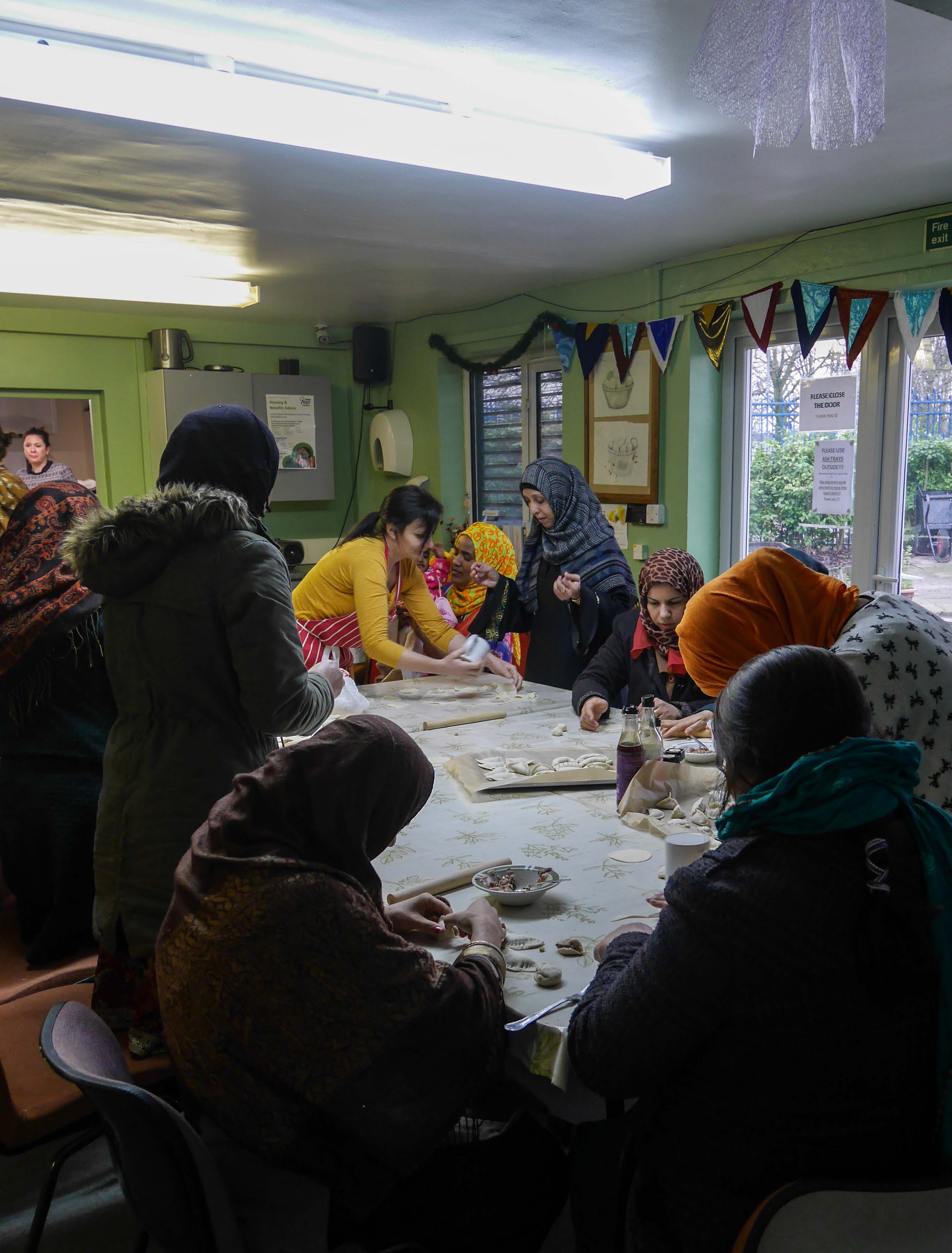 We started by having the filling de-constructed in front of the women, which gave us the opportunity for some vocabulary building. 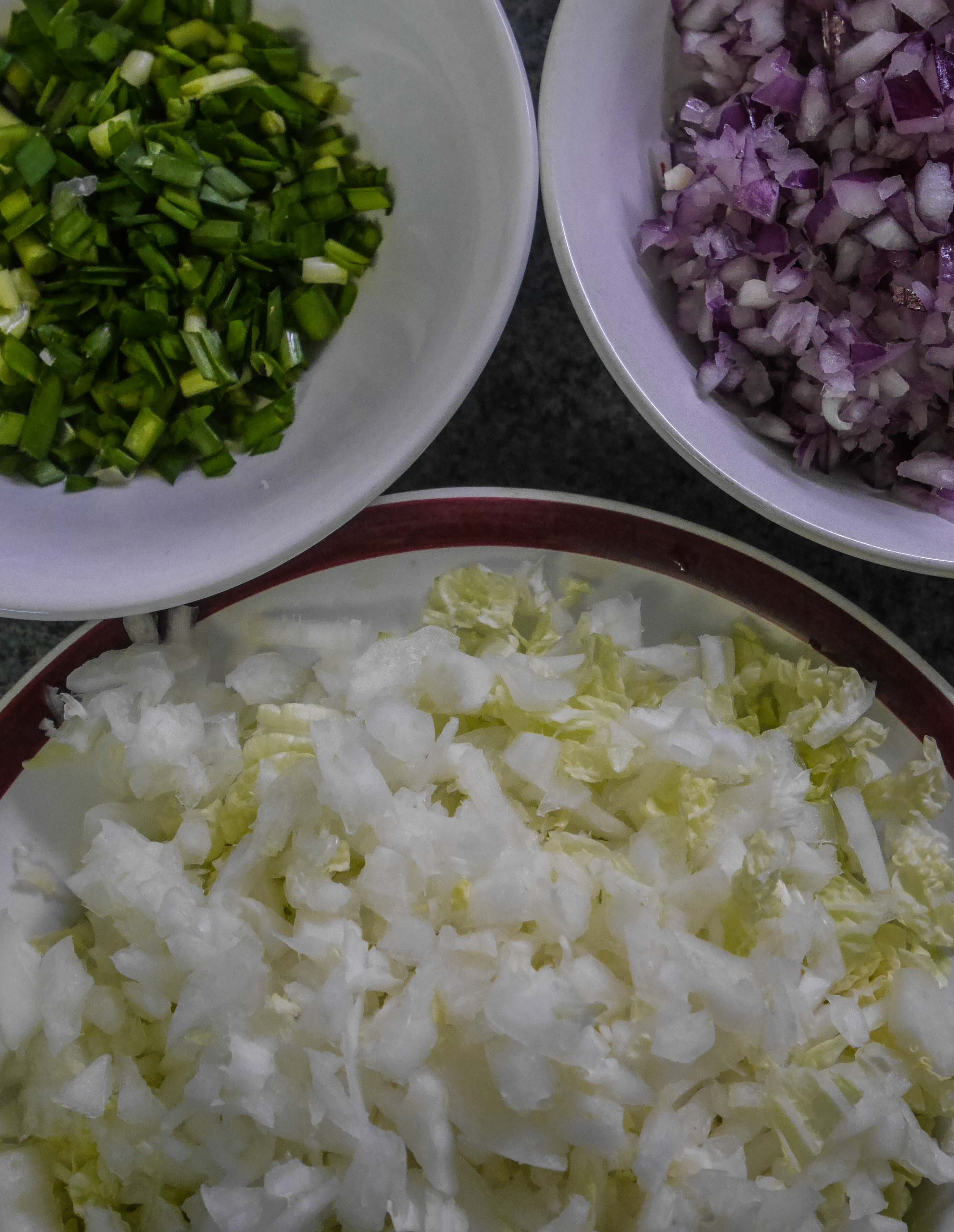 The women also had their own bowl from which to combine the ingredients together. One woman mixed the meat, vegetables and spices together as they were passed down the table. 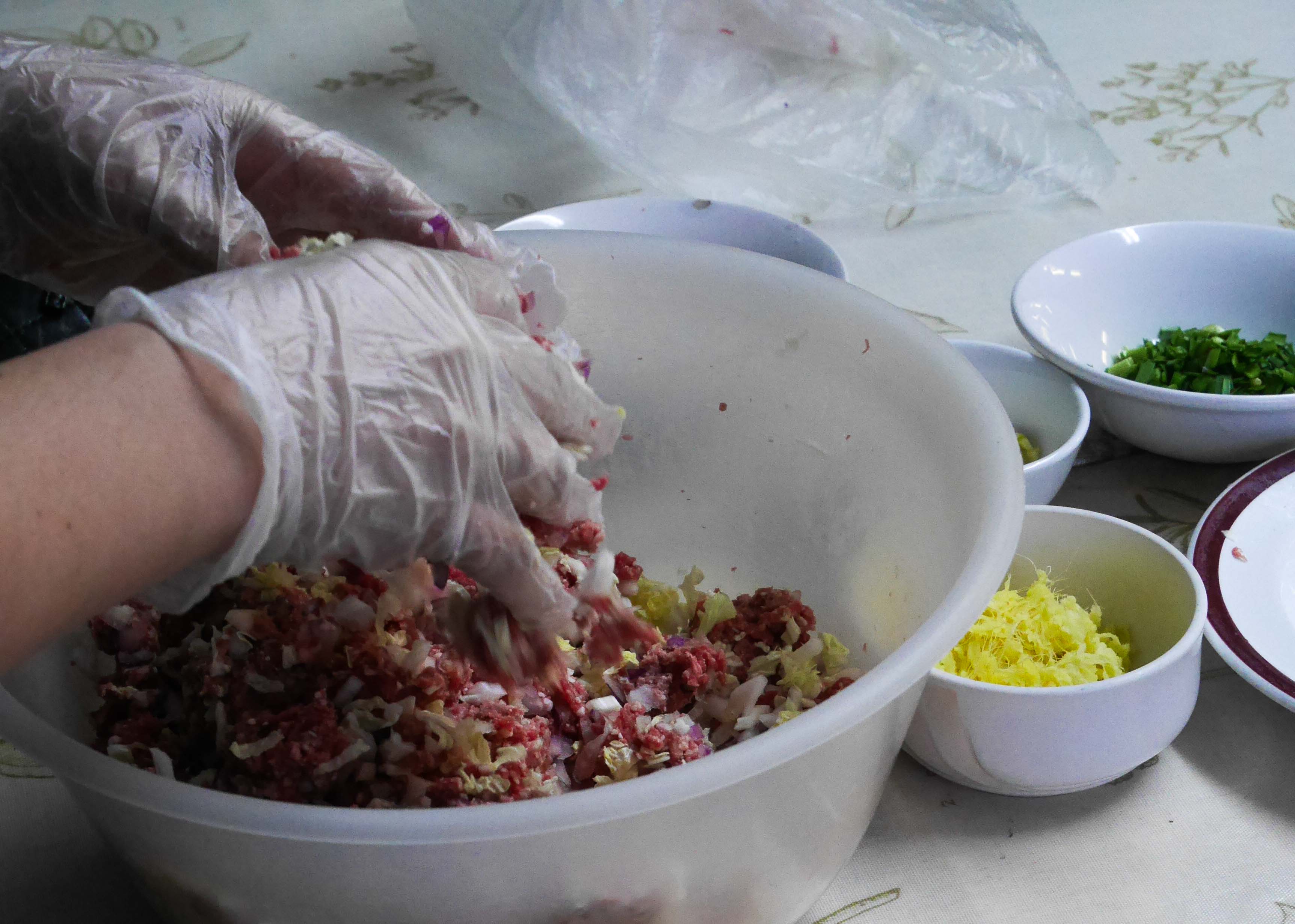 We personally enjoyed this part the most because we noticed as the women were passing down the spices and sauces toward the bowl, they were smelling and identifying the ingredients, thus making the connection to the English word and the object almost instantly.
After the dough and filling were complete, it was onto the construction line…
Chinese dumpling making calls for a lot of teamwork. This was another reason why we chose to make Jiaozi. One woman separates the dough and rolls into little balls. 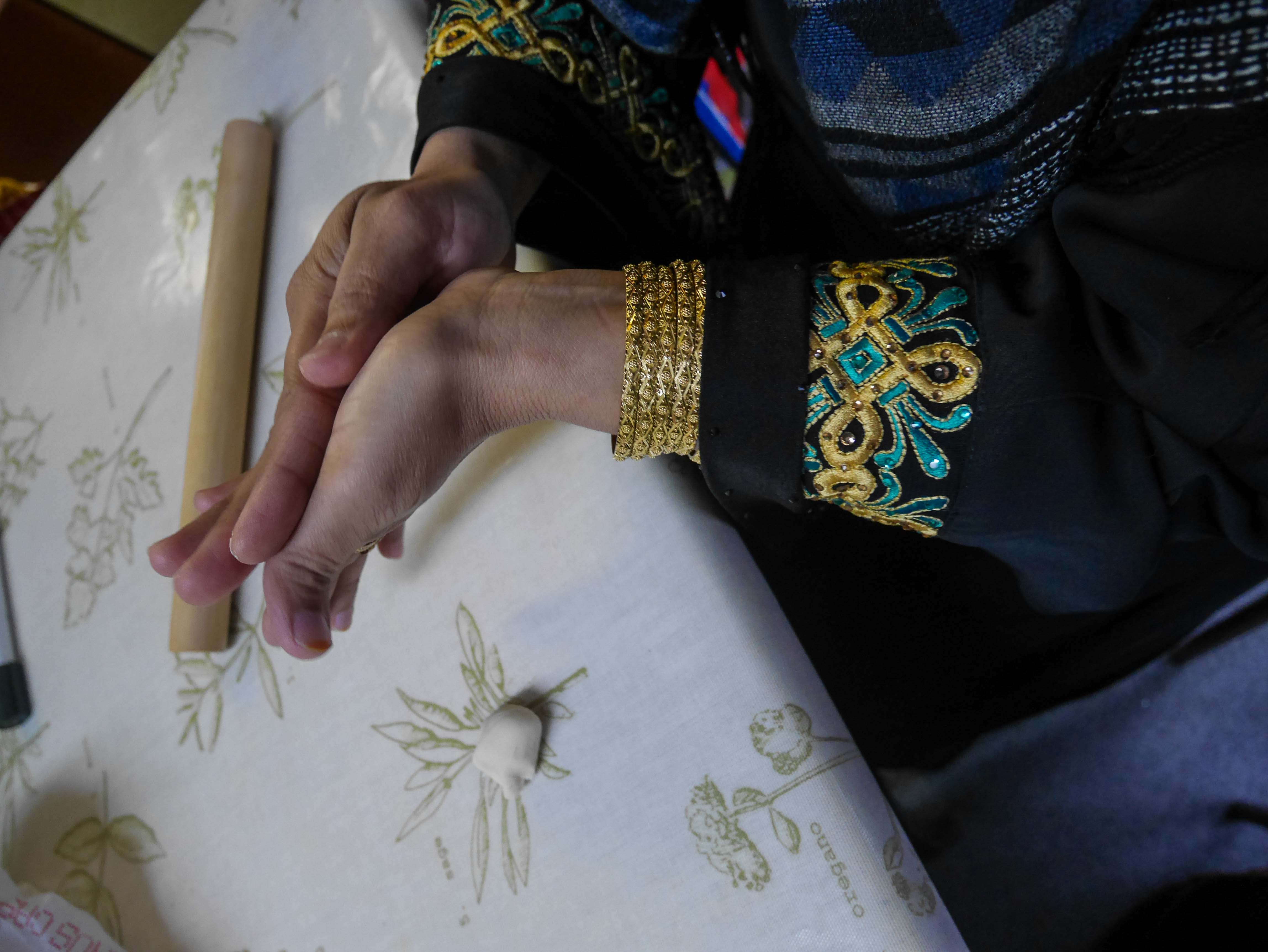 Another then uses the small rolling pin (which you can get from most well-stocked Chinese supermarkets) to roll the balls out flat. 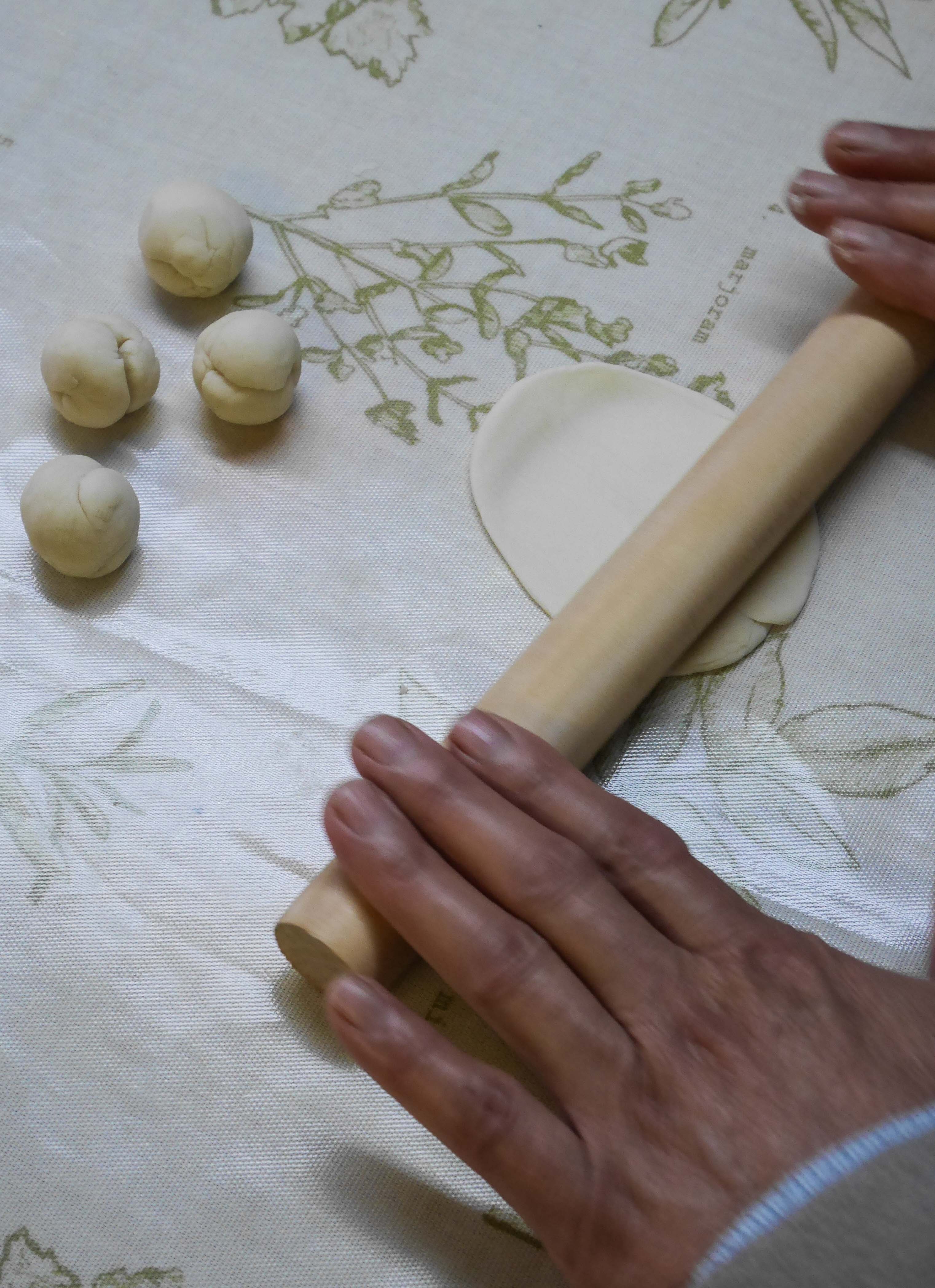 Then the last women fills the flattened piece of dough with a small amount of filling.. 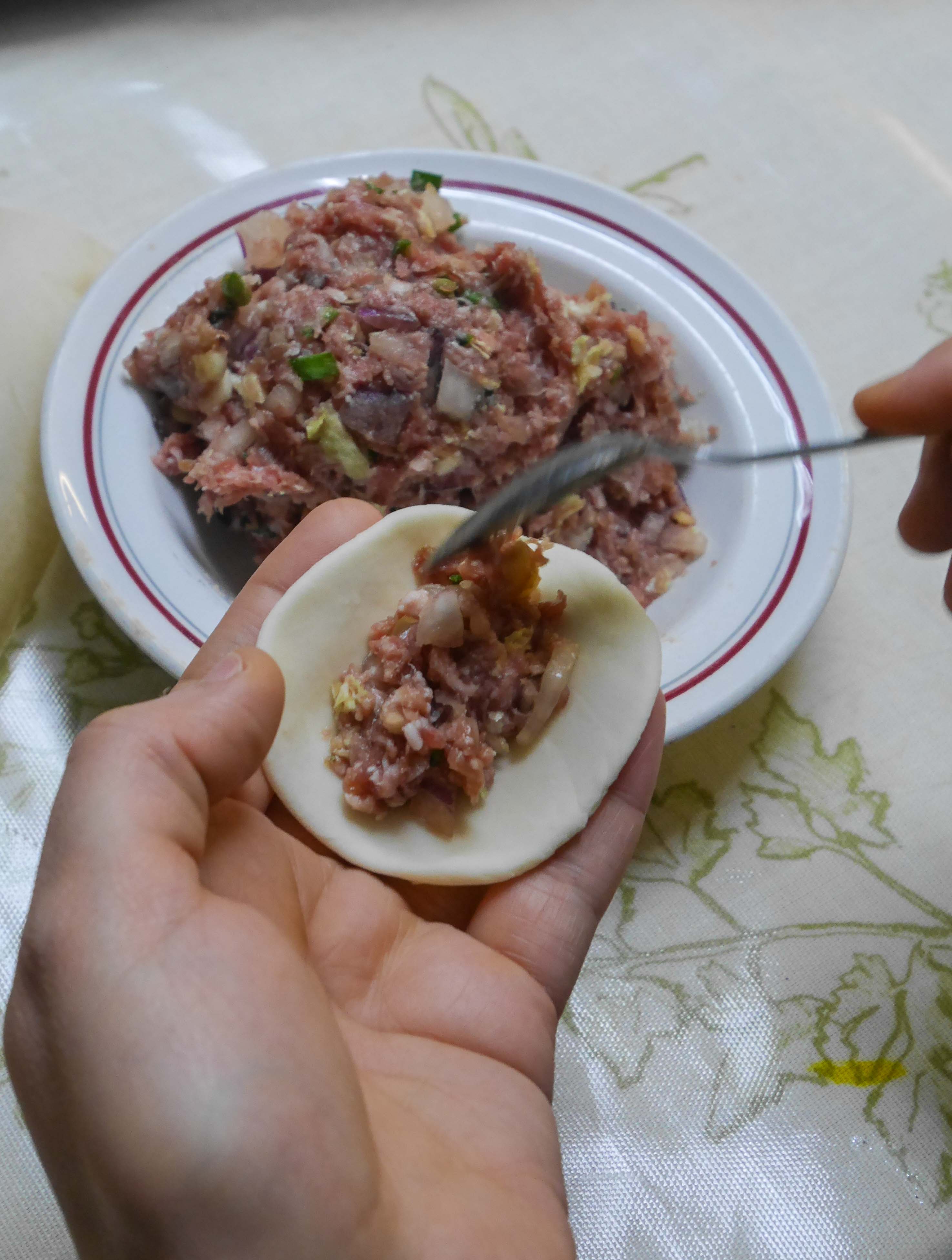 ..and folds to whatever shape their heart desires. 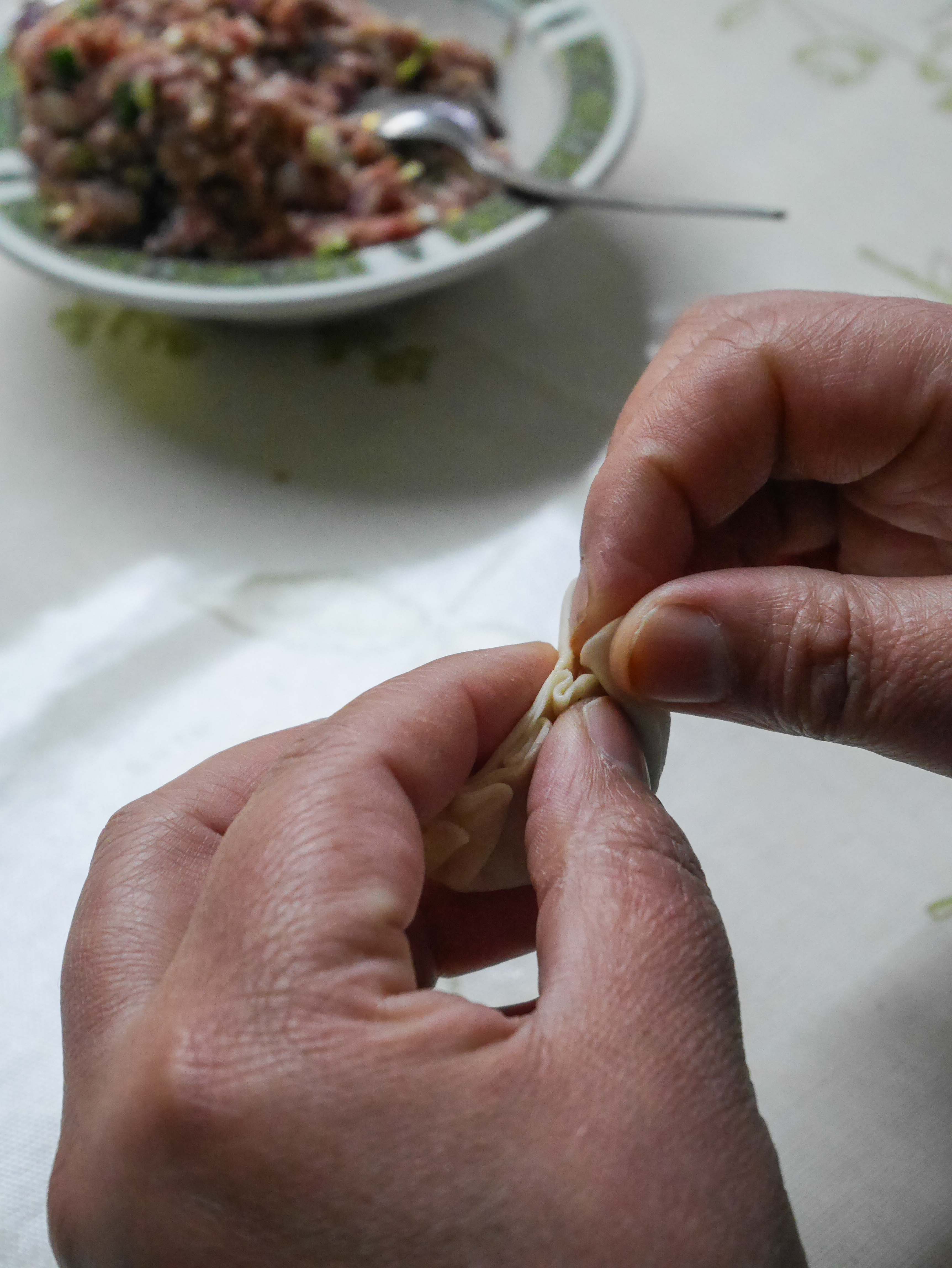 We got some awesome shapes. Karolina and one of our volunteers Nola both commented that this was their favourite bit. Without instruction, the women decided to be creative with their folding. Some resembling traditional folds… 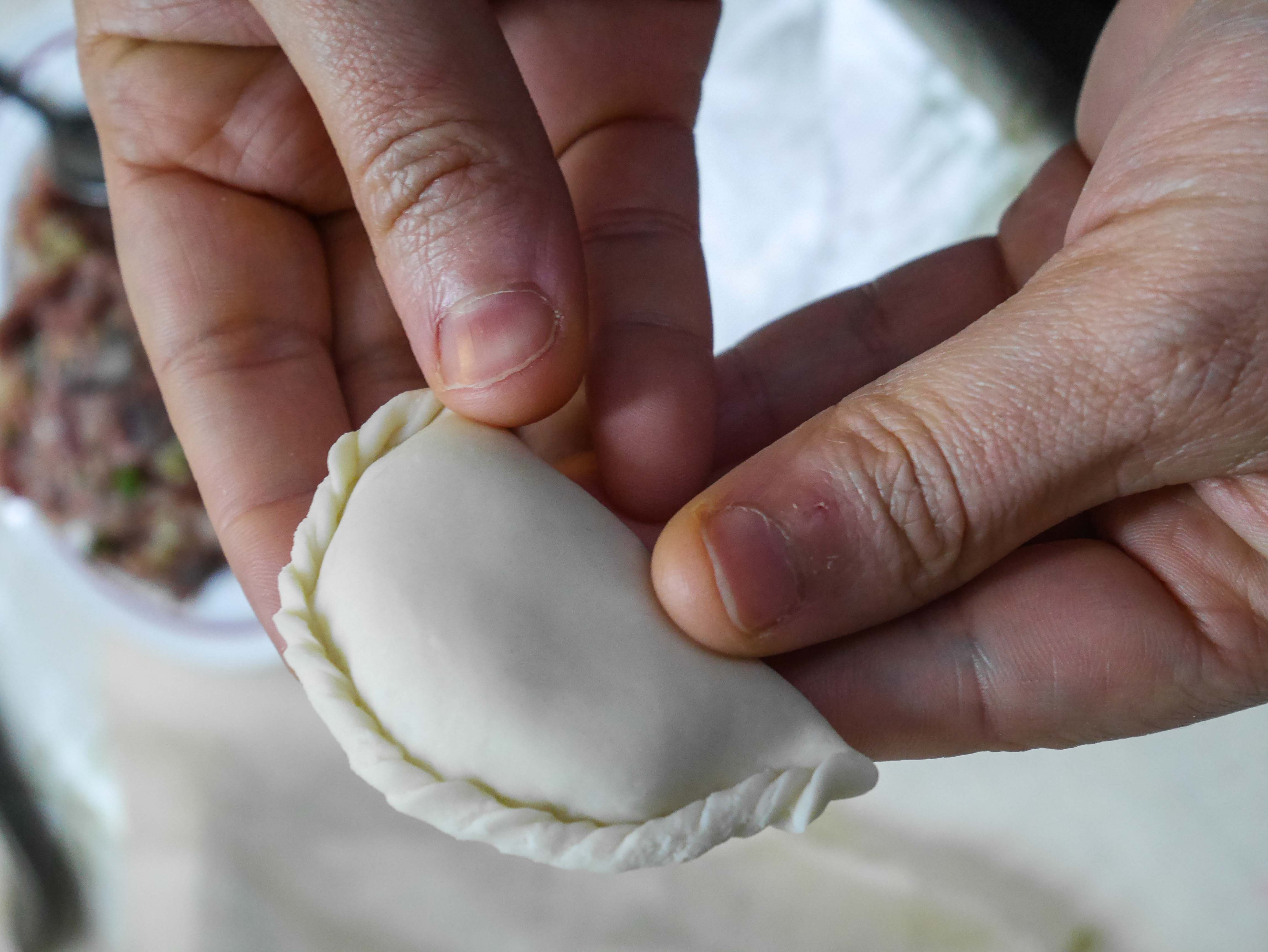 …some a bit more adventurous. 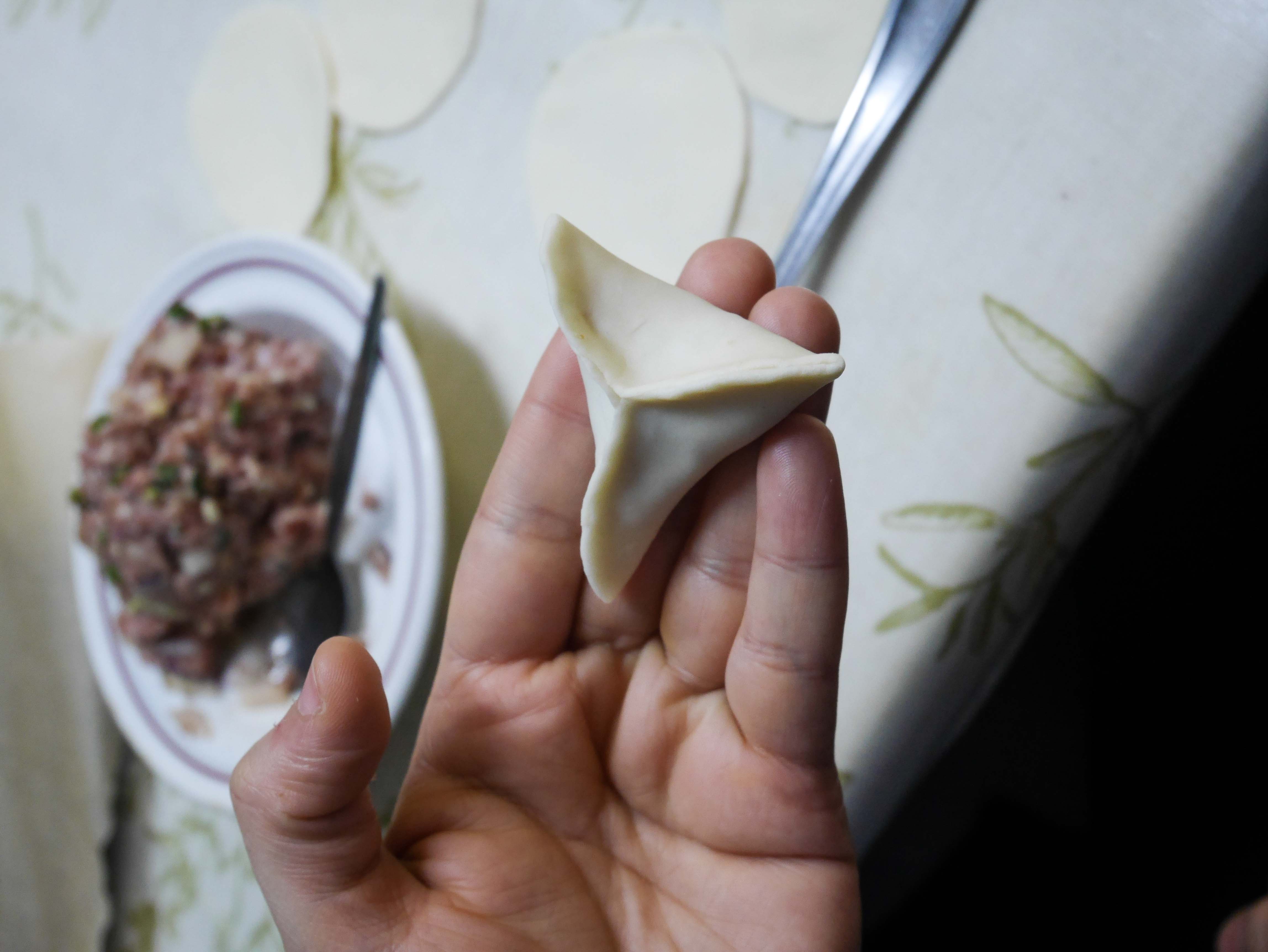 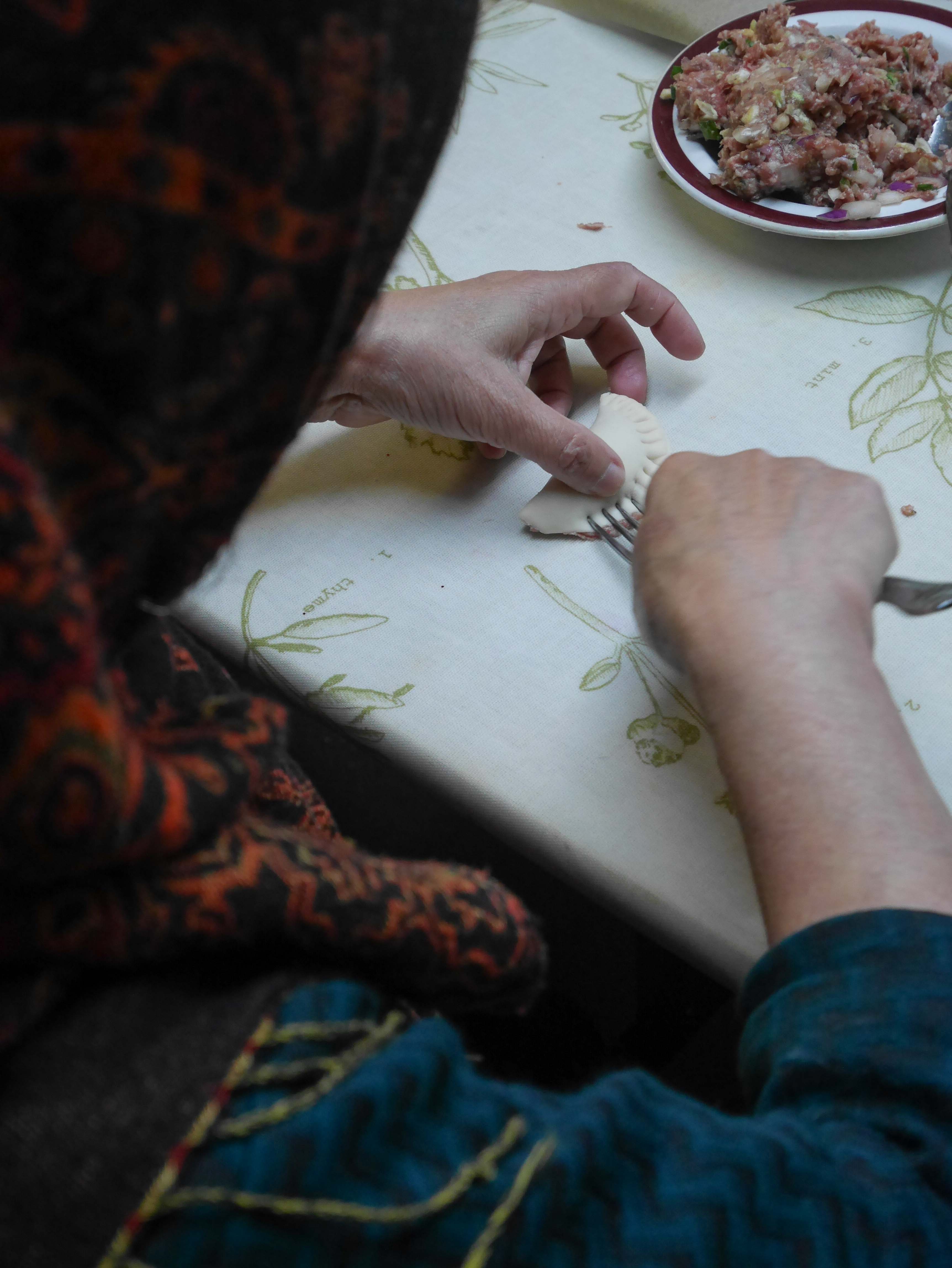 ….extra utensils found their way onto the table… 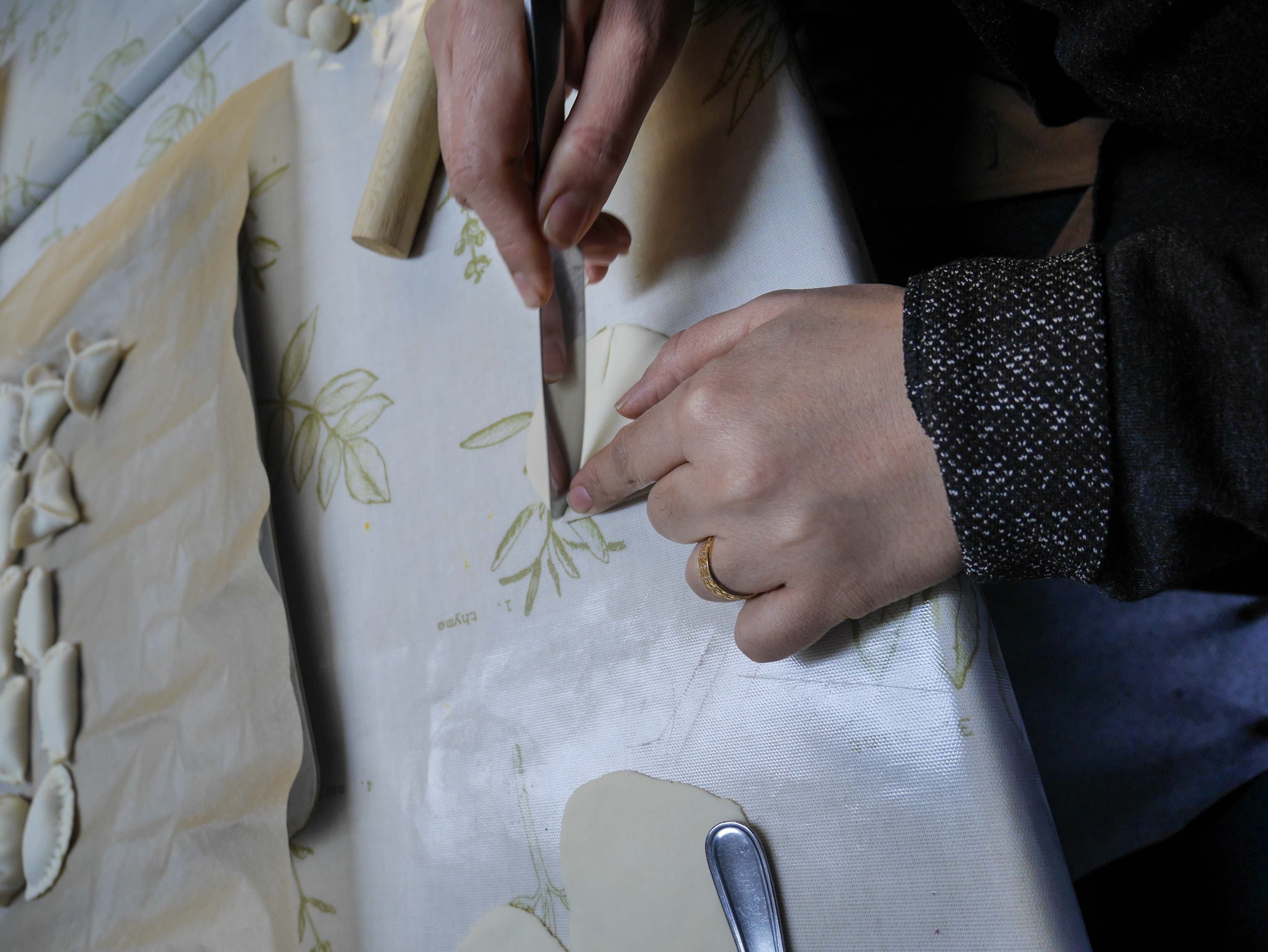 ..creating a whole variety of folding from different countries, cultures and imaginations.

In total we had 14-19 women (and a baby), from Pakistan, Libya, Iraq, Britain, Ethiopia, Spain, Ukraine and Afghanistan. We had some women returning from the previous session, which was a huge bonus! 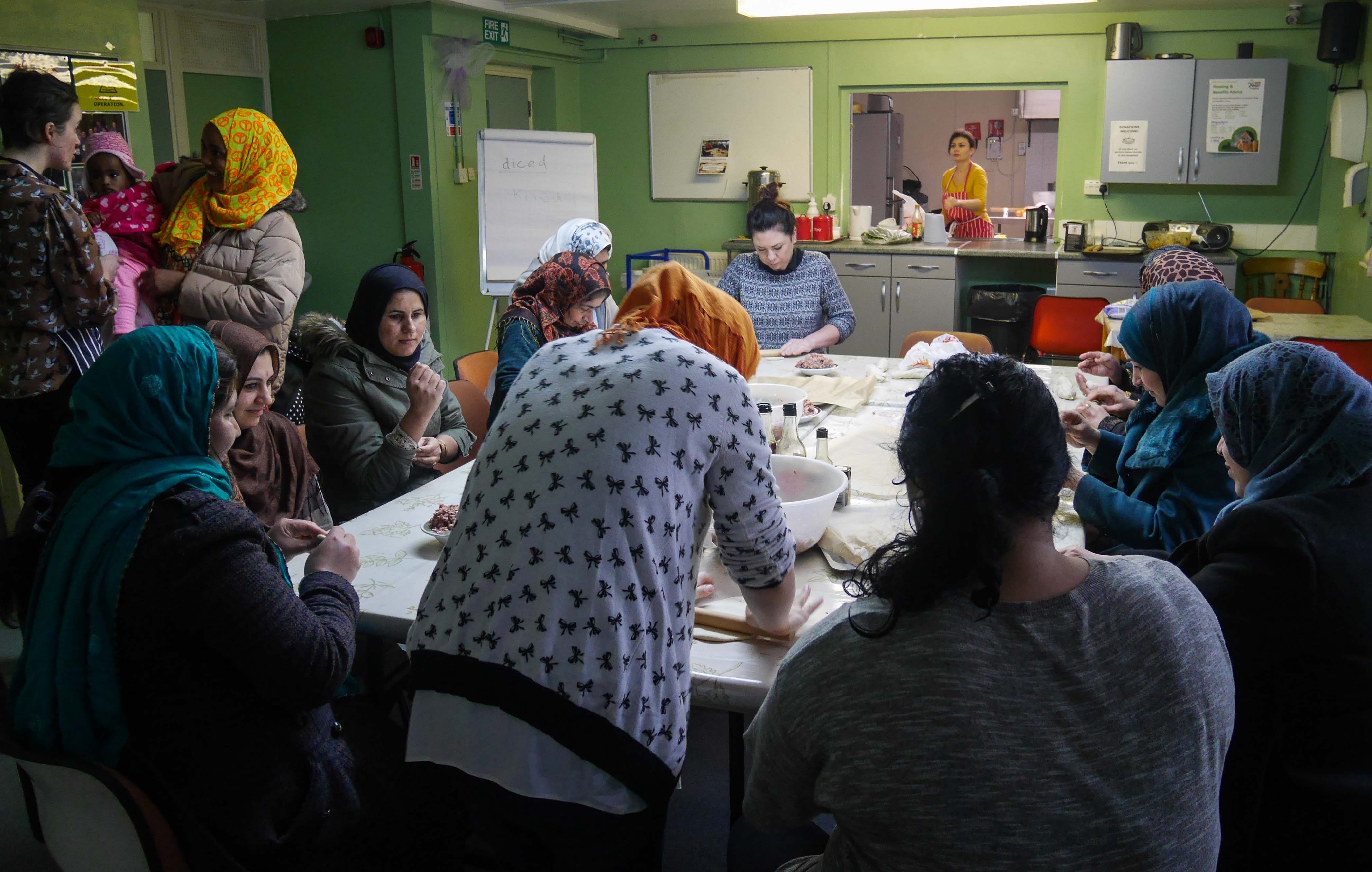 After our making, there was time to eat the dumplings and chat.We boiled the Jiaozi, but some women commented we should try frying them, which we will definitely take into account for our next session. 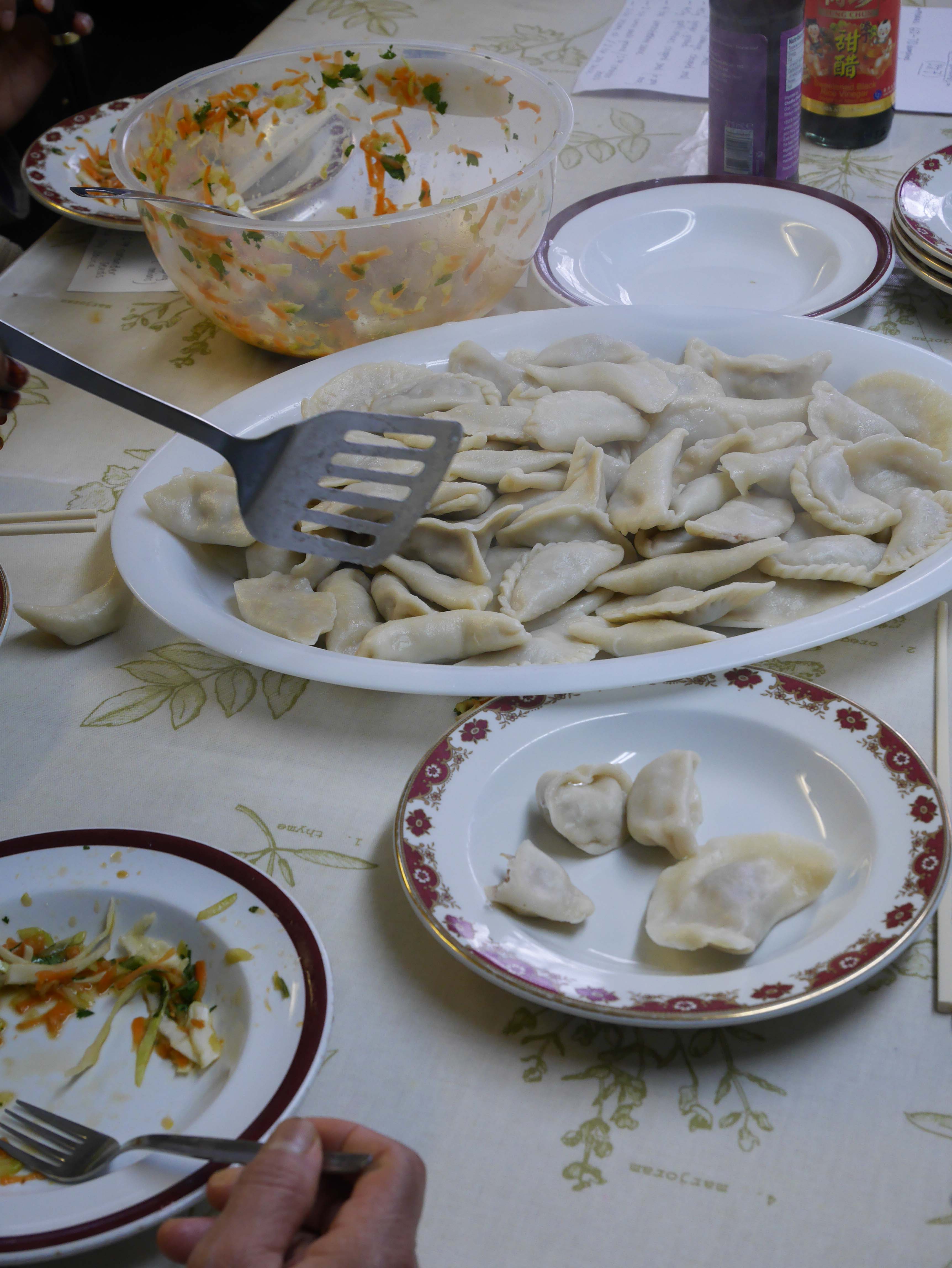 We served the dumplings this time with a simple Asian salad and sauces as well as chopsticks to give more of an experience. 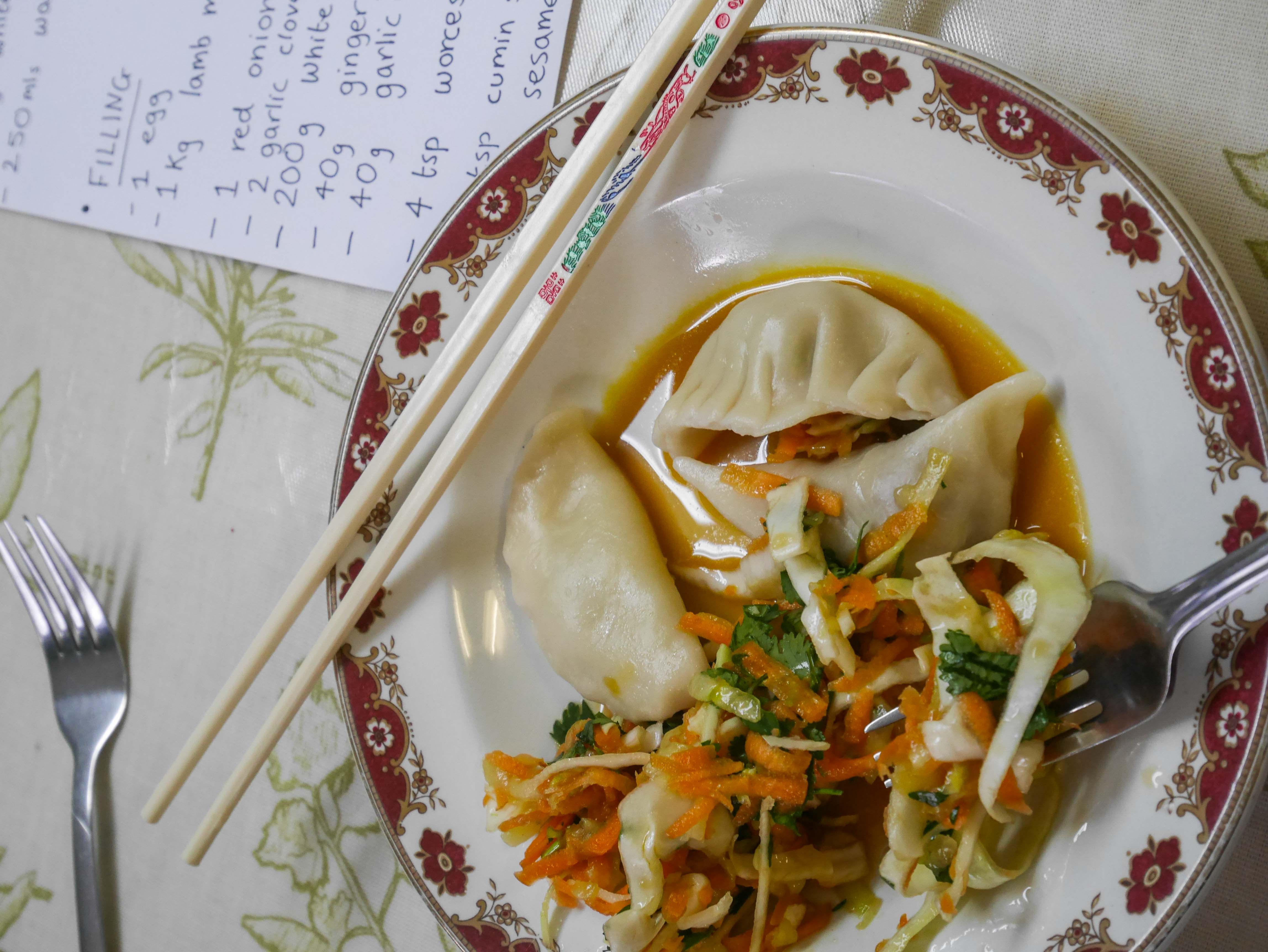 This session really had its own personality. I think we had the women to thank for that. They were willing to learn the process, but really took the final product into their own hands.