A couple of months ago, Sanaa and Aghareed, two women who had attended the last Heart & Parcel session came to their weekly English language parenting course with a plate of delicious pastries. They had really enjoyed folding the Jiaozi that we had made last time, and wanted to show us how they did various folds in Iraq. Because of this, we decided that these women should lead our February session.

The past few months we have been discussing different formats to our sessions and this idea of the learners leading the session was one we kept coming back to. Allowing those who attend our sessions to decide what to cook and show others how to make their own recipes fit in line with our ethos of being able to offer women what they want, rather than what we think they want.
These pastries use a bread dough and are eaten in Iraq throughout the day, or more traditionally for celebrating the end of Ramadan. There were two kinds of pastries that Aghareed and Sanaa planned to make and you can find the recipe for the most popular (and most beautiful we think) bread on a post coming very shortly!
When we first set about organising the session, we realised that the preparation beforehand was an ESOL lesson within itself!  Buying the ingredients and working out the quantities, organising the time and place, writing the recipe cards, advertising. All these activities use a variety of skills involving English and numeracy. Aghareed and Sanaa were well organised so there were no major slip ups. We wanted to leave the planning really loose from our side, as we wanted to see what would happen.
We held the session again at the Welcome Centre in Cheetham hill as part of ‘Women only’ Mondays. Because we had some returnees from the previous sessions and some new women from the surrounding primary schools in the area, we started with an introduction to food and each other to get everyone familiar with the group. 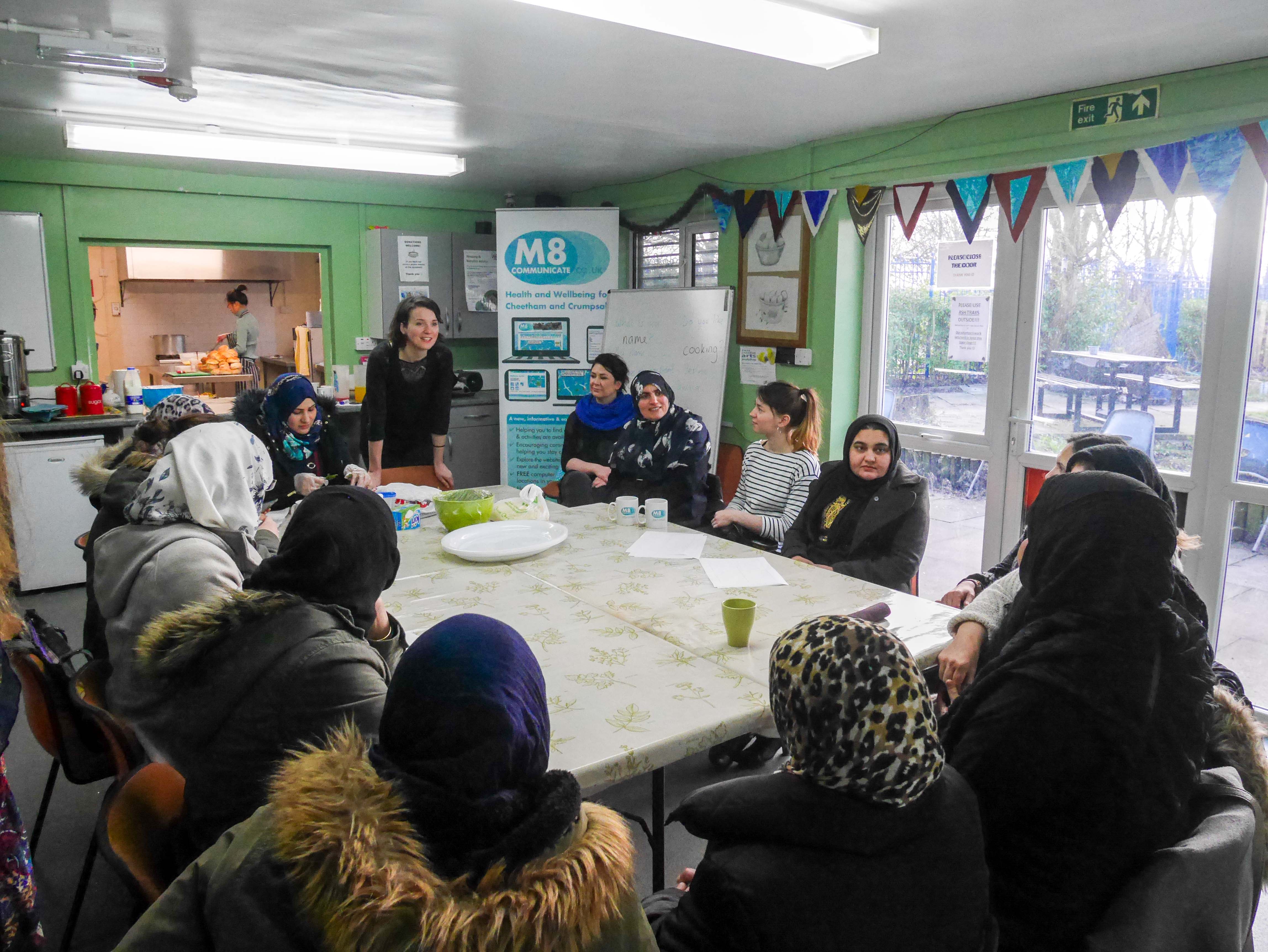 When Sanaa and Aghareed arrived, they put the women to work by preparing the first of two fillings, cream cheese and mint. 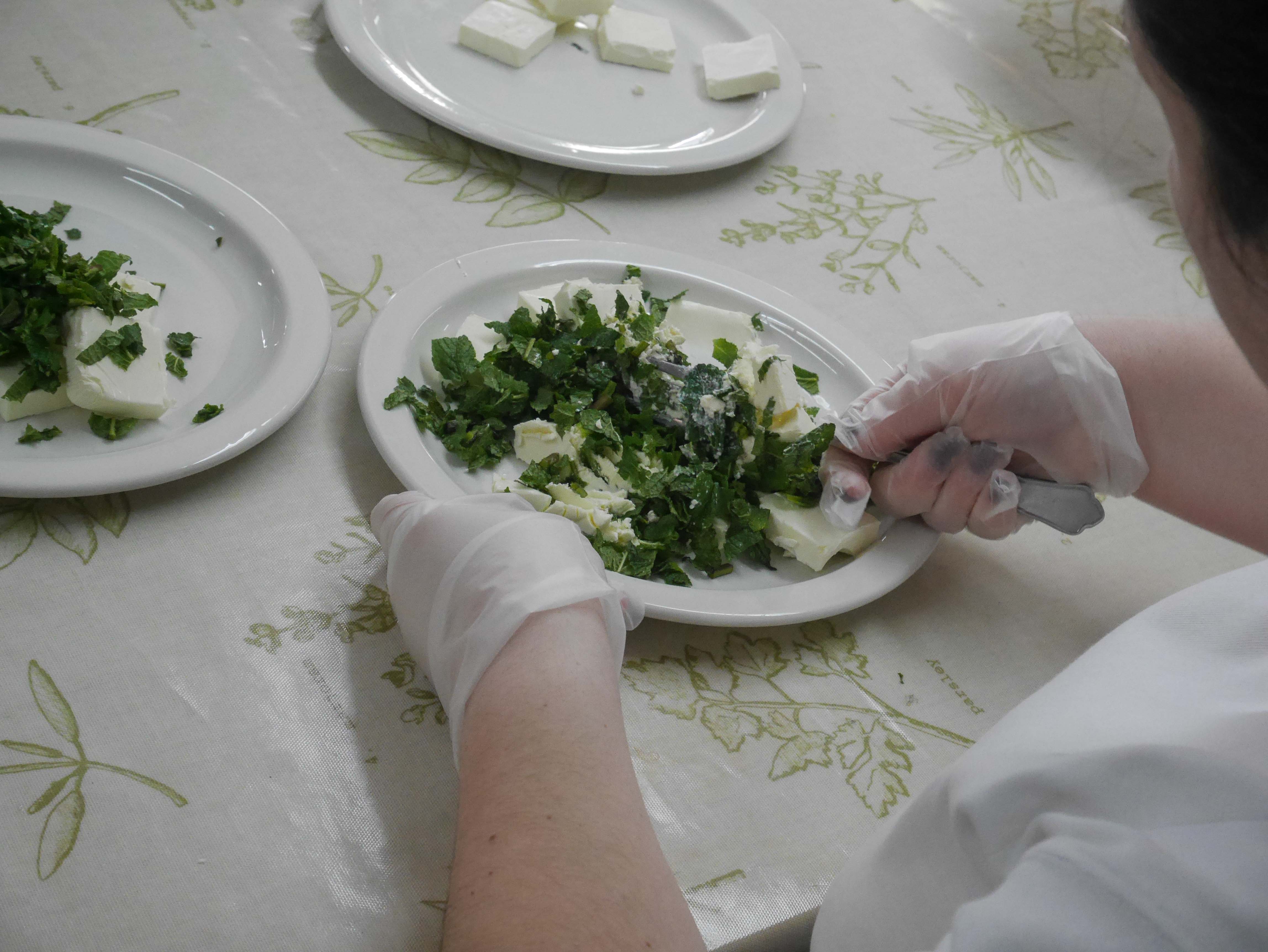 We naturally found our ‘safe places’ in the roles that we assumed –  Clare teaching vocabulary on the board and Karolina making sure the session was running smoothly so that everyone had what they needed. Our two volunteers were also on hand, taking photographs, chatting with the learners to reinforce the vocabulary and keeping the space clear. 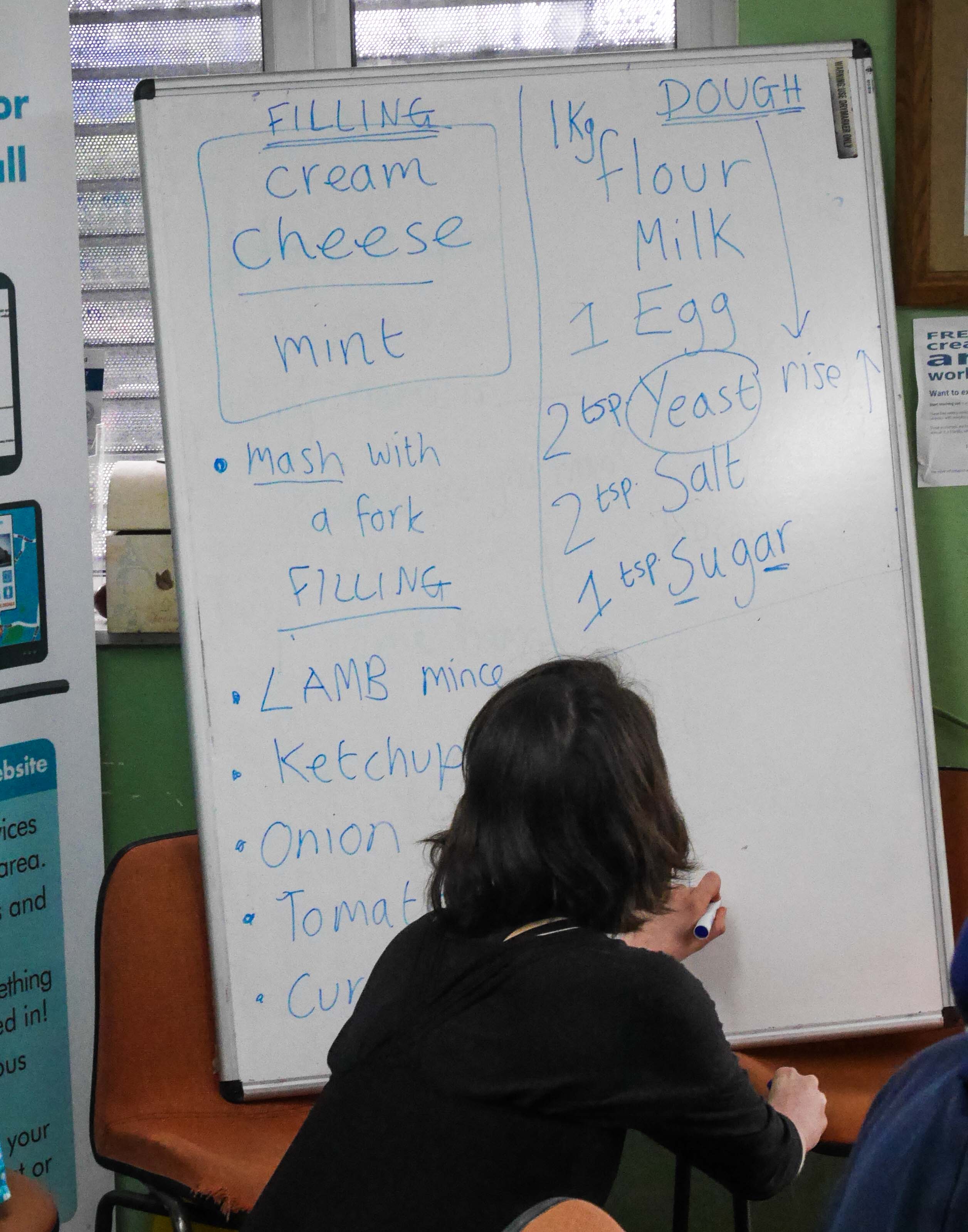 The dough had been made previously and was left to rise in a warm place. 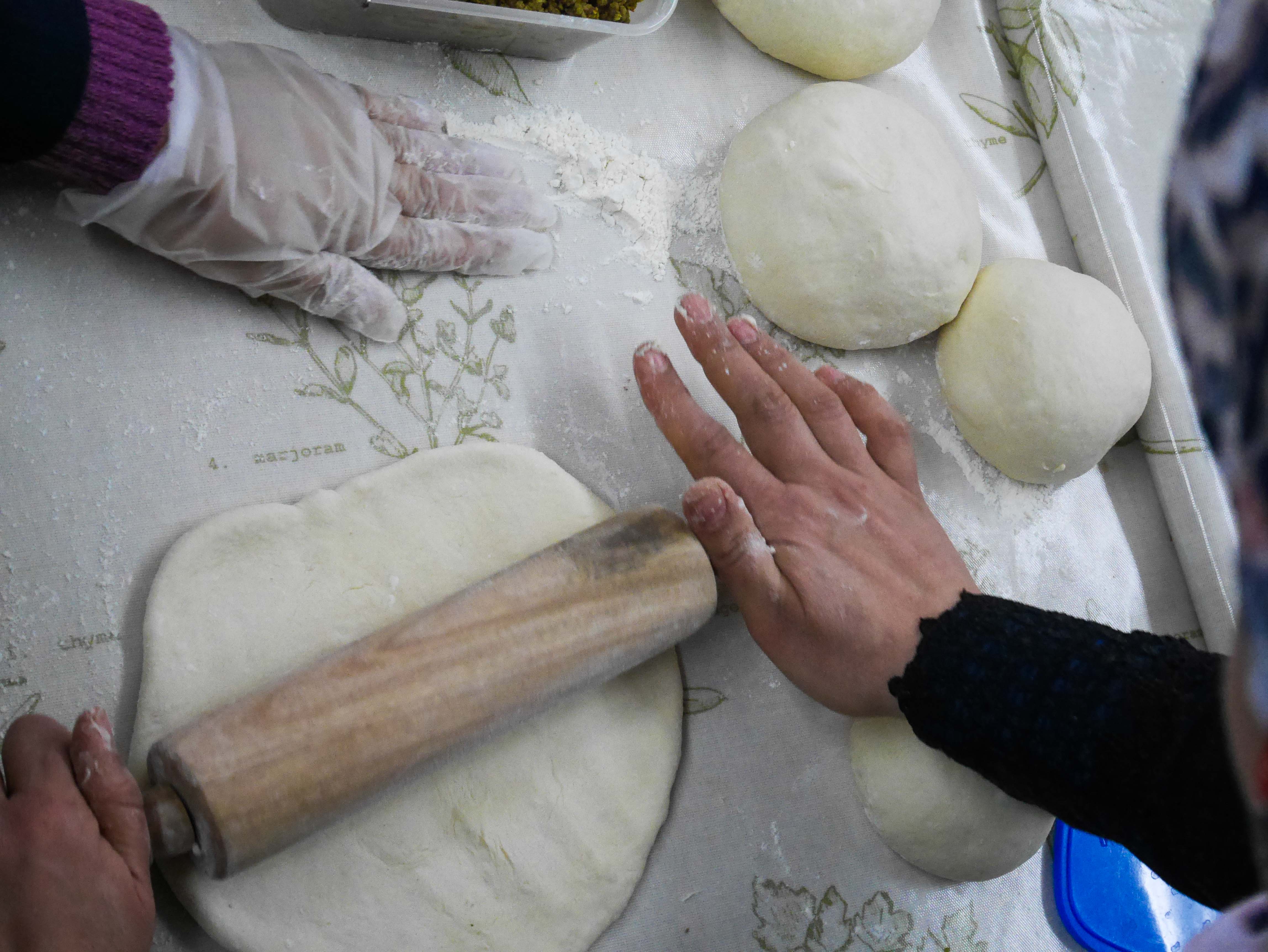 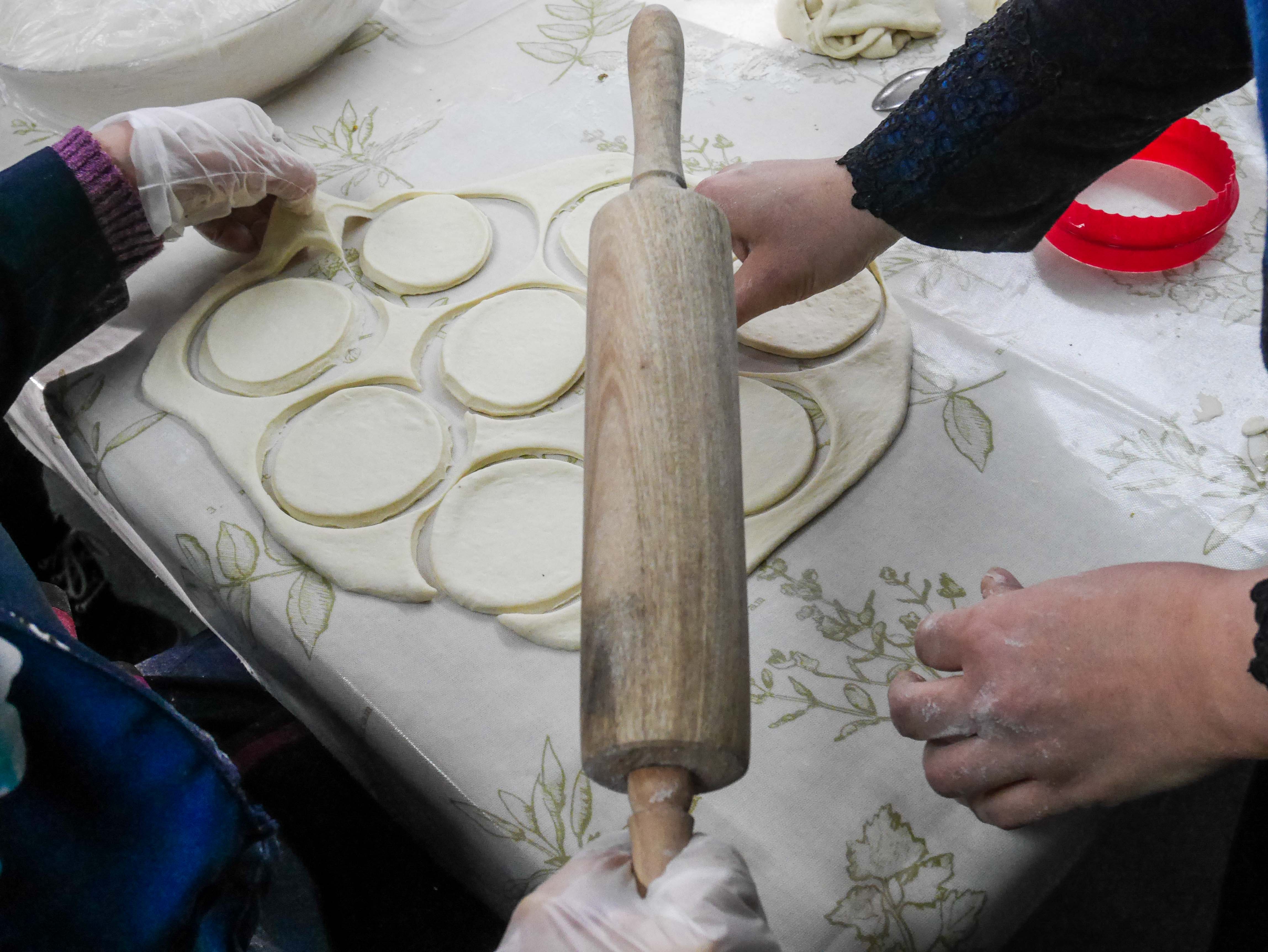 We all set about cutting the dough up, rolling out and then choosing the fillings for our different pastries. There was another filling of minced lamb flavoured with cumin, parsley, onion, ketchup and curry powder. 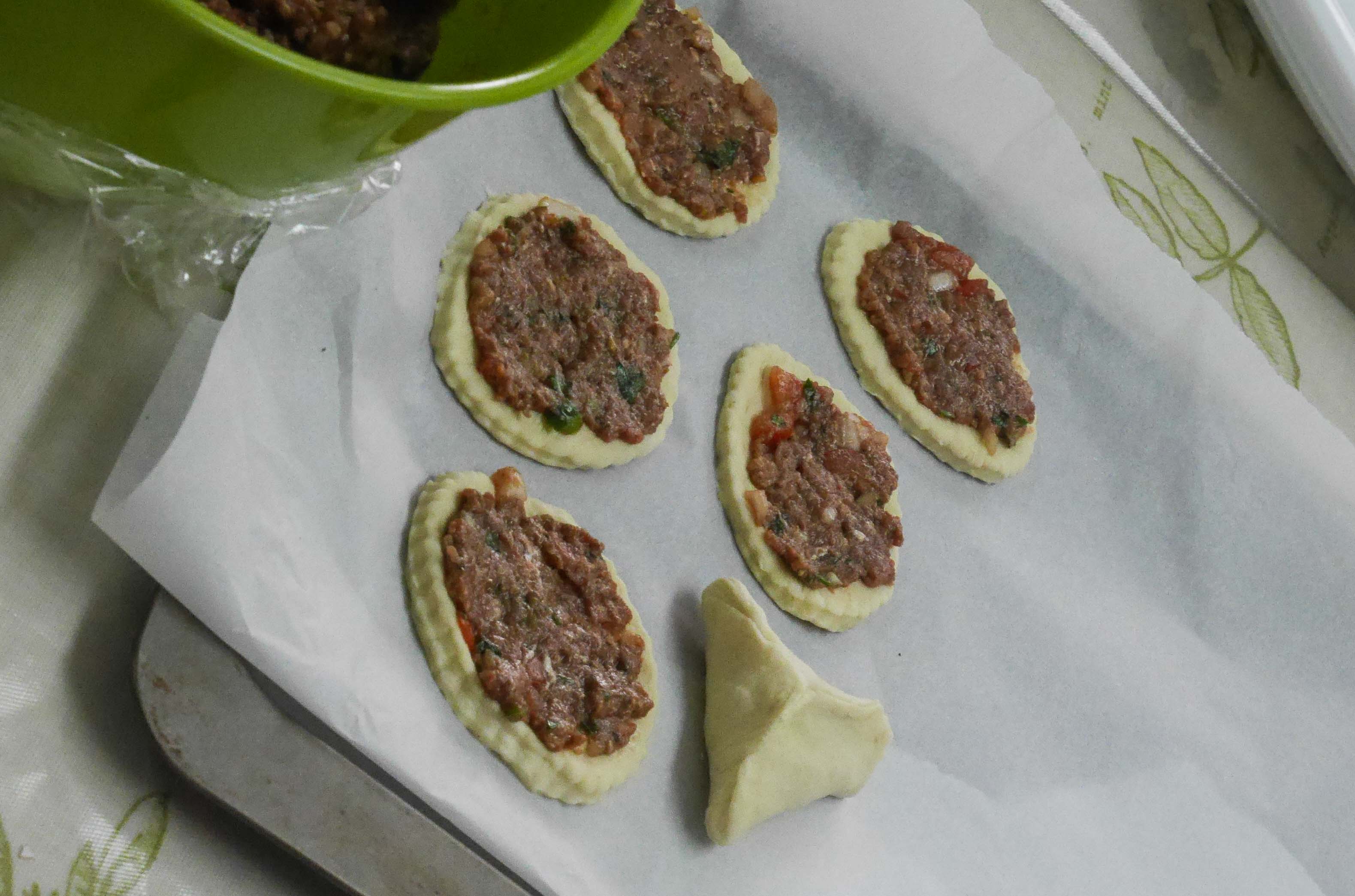 Aghareed and Sanaa taught by doing the folding techniques first, and the women then copied. It was a bit chaotic at first, as there were so many different folds, but that didn’t seem to matter too much as people had begun to chat and help each other out. 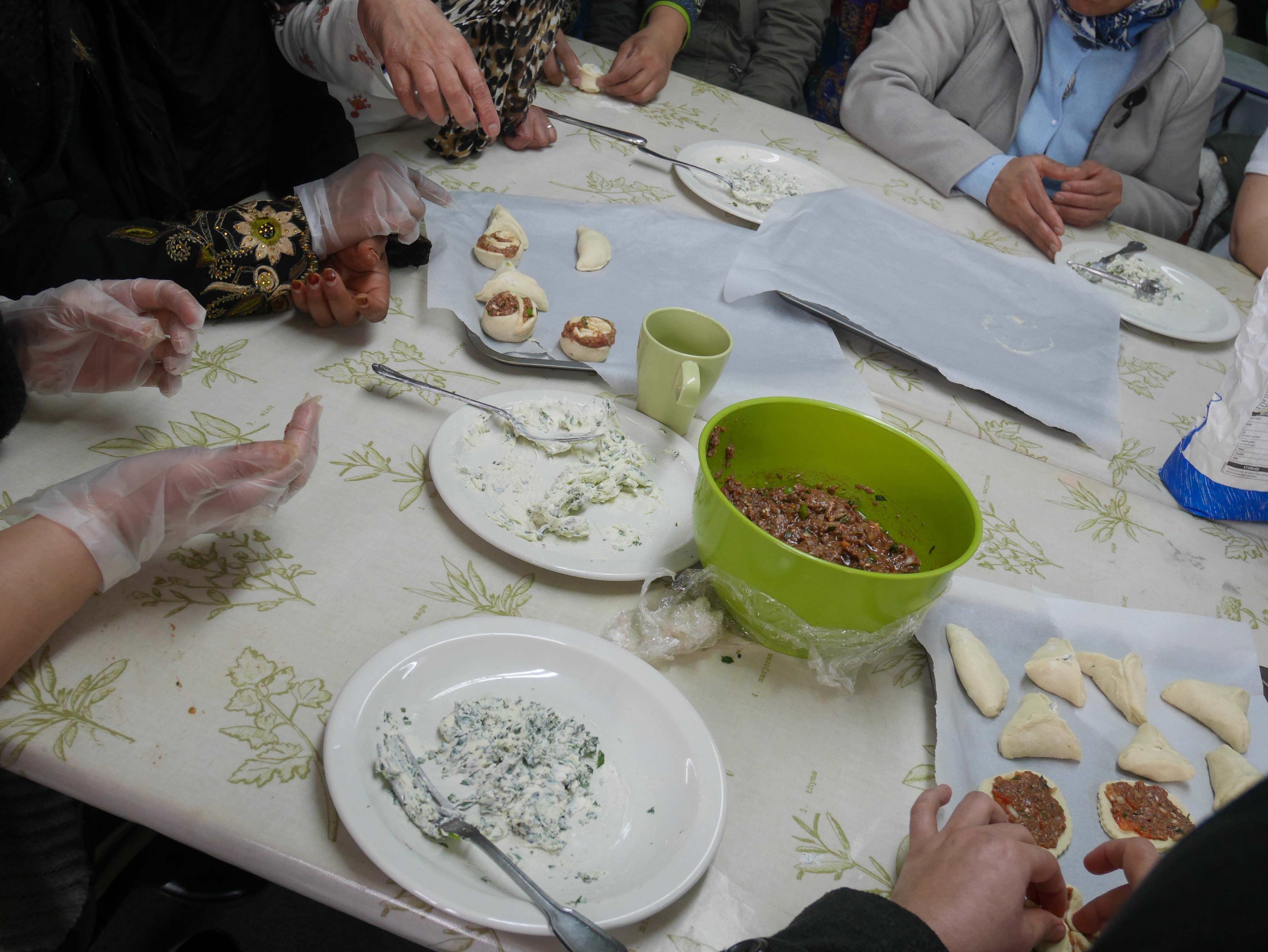 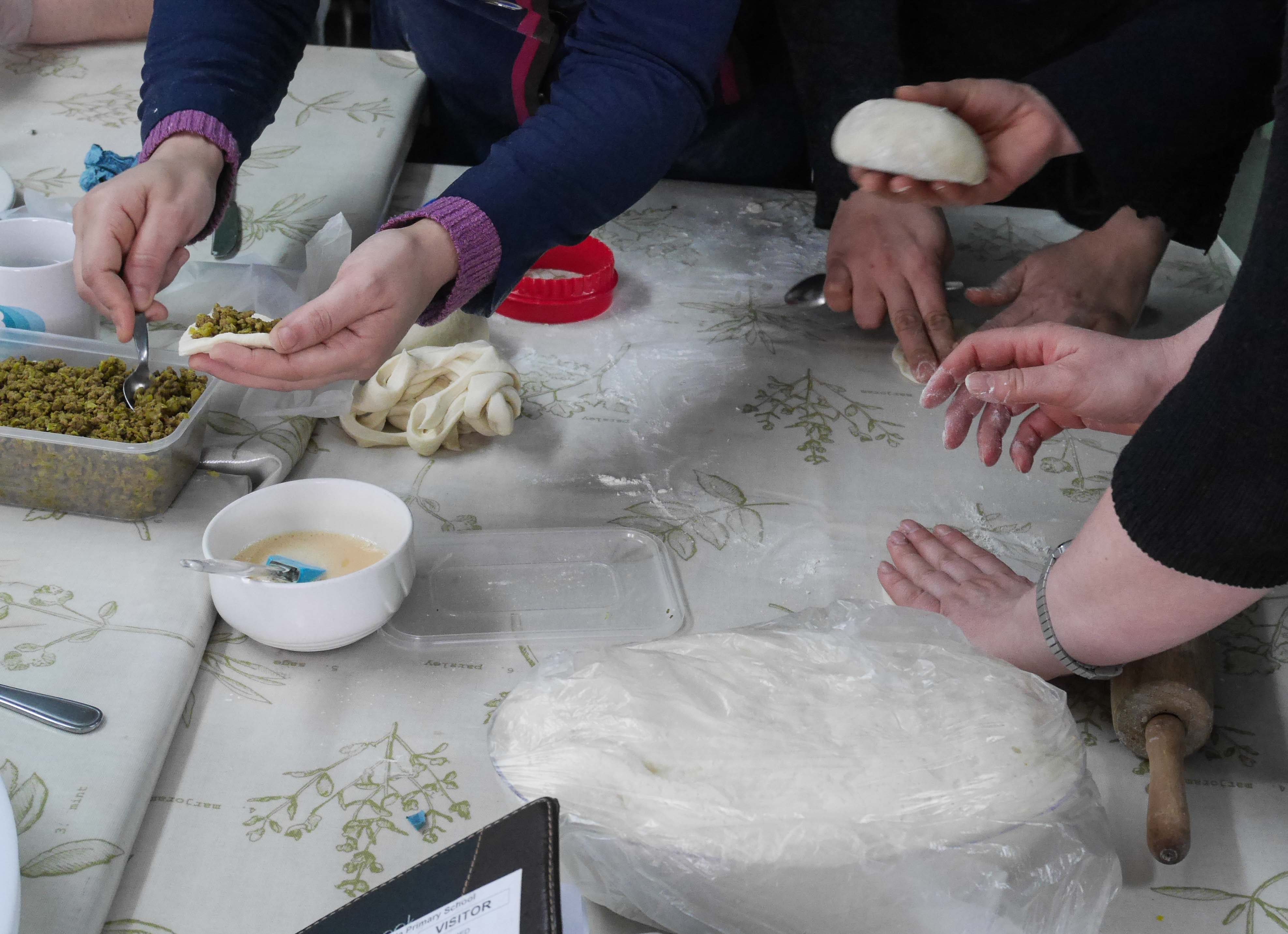 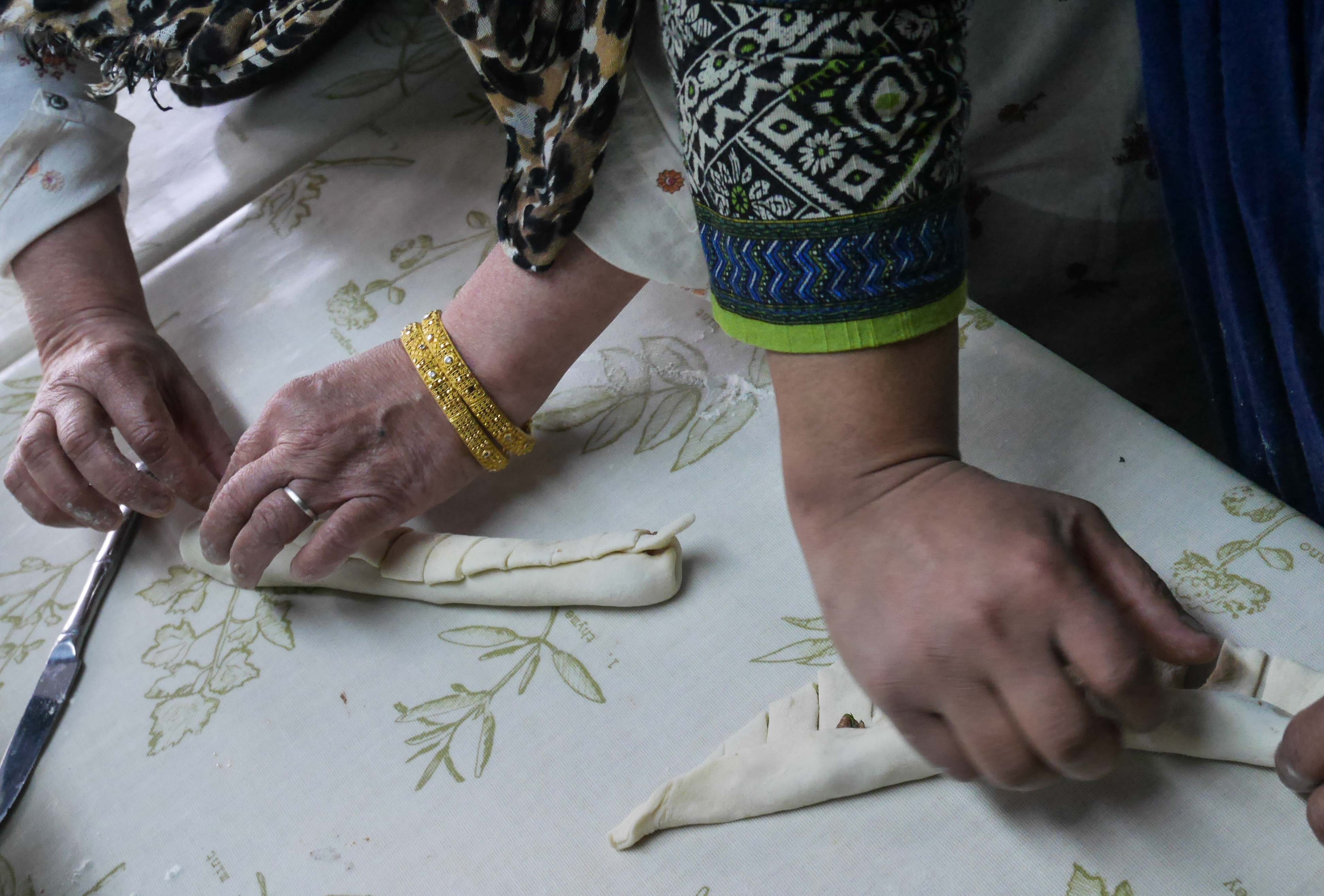 One of the women used to own a bakery in Morocco and had made many, many pastries. We suddenly became very aware of our folding technique.. 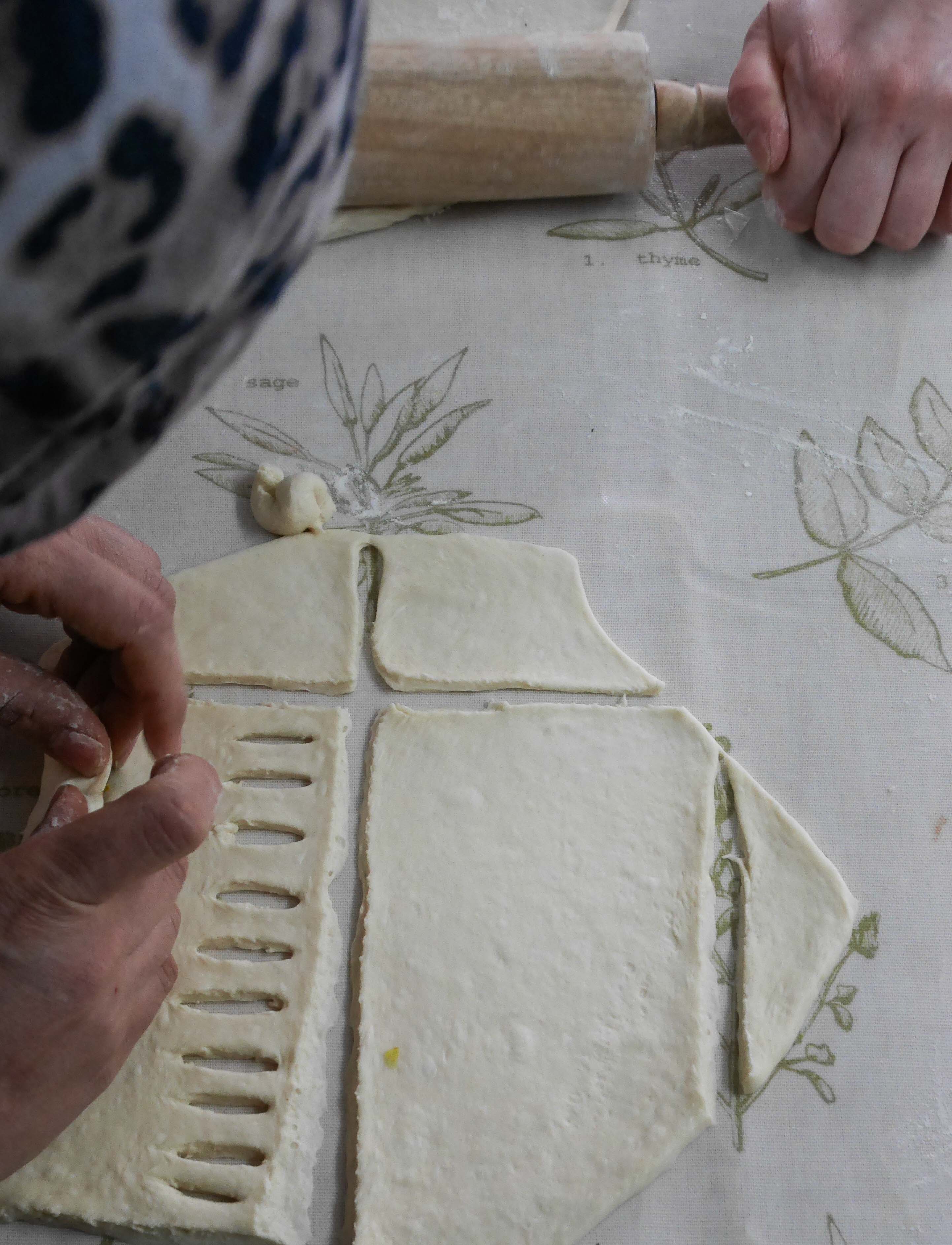 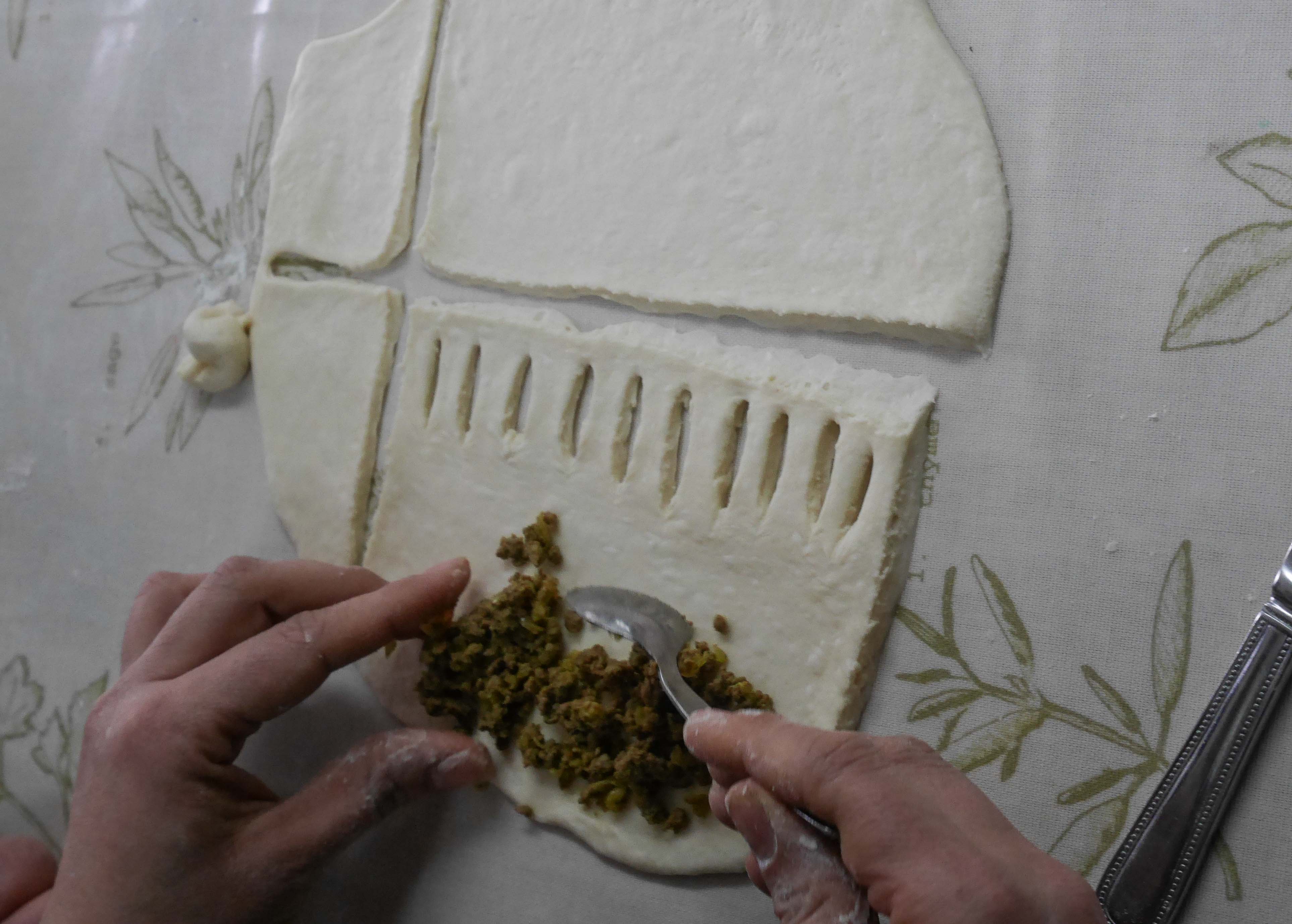 The folds that Sanaa and Aghareed had taught us were so creative. We learnt rose folds, croissant folds, triangle folds, spiral folds. You name it, we folded it. 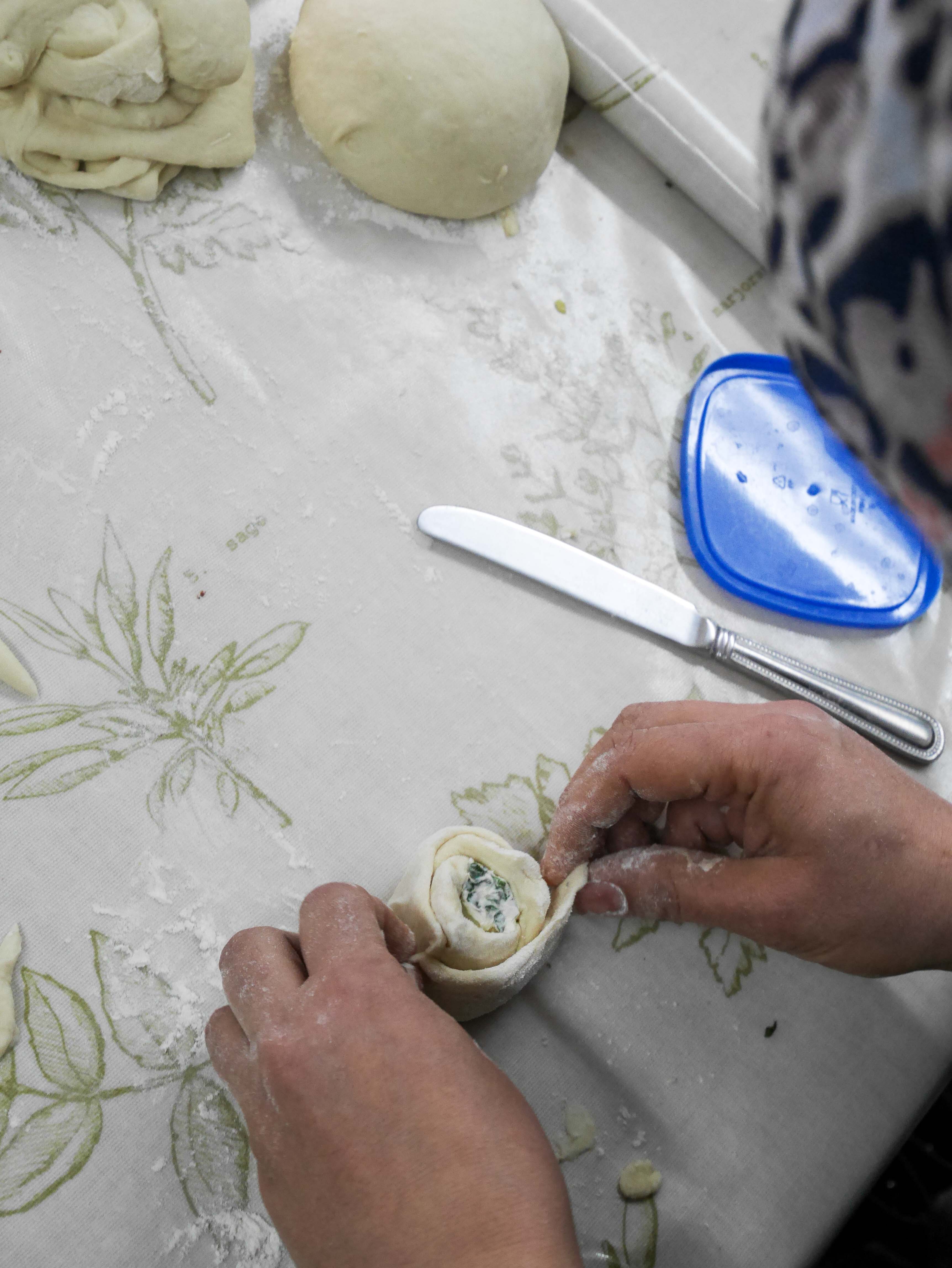 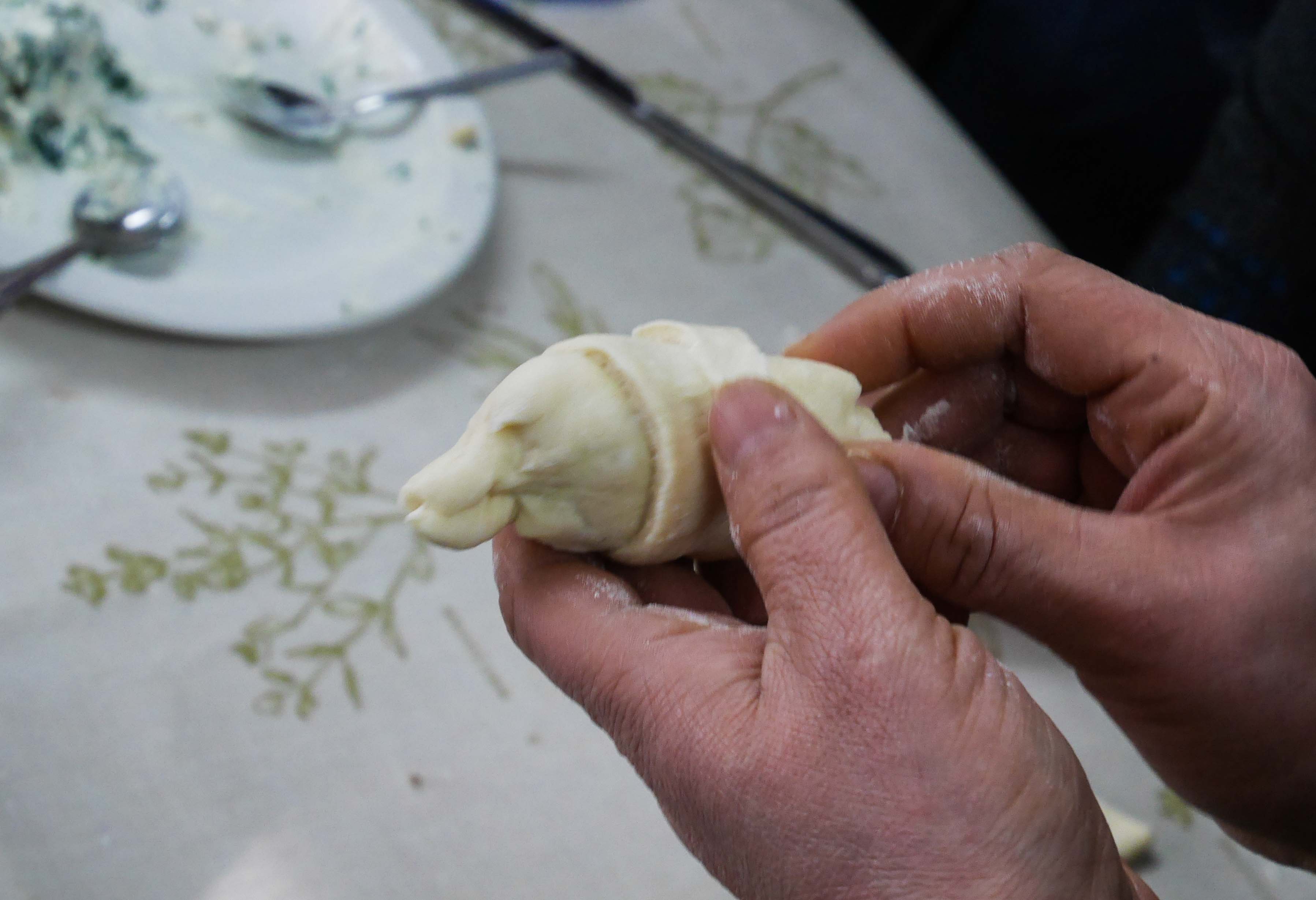 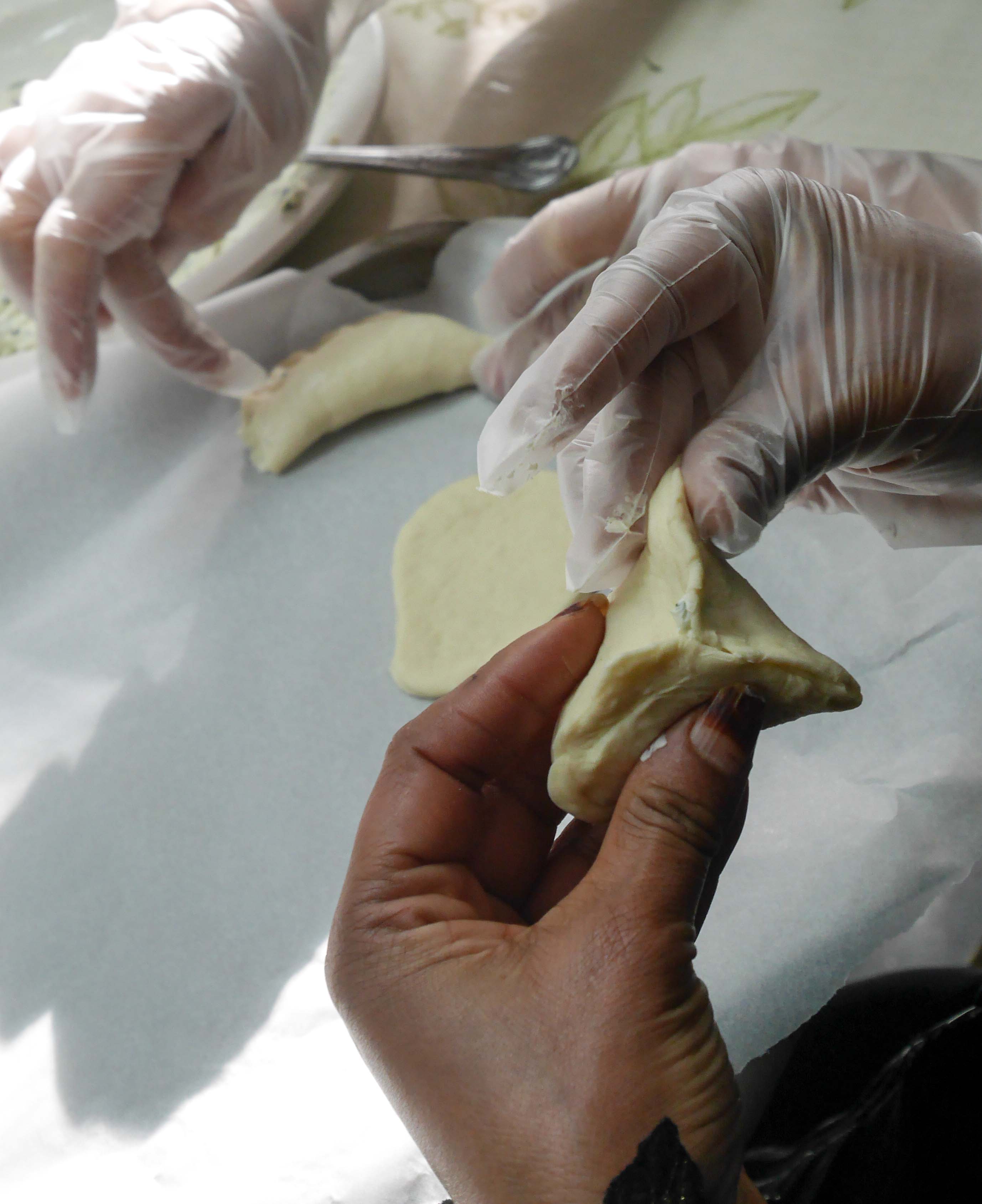 The women from Middle Eastern countries all had a form of these pastries in their own culture, with slight changes like adding sesame seeds or altering the shape. 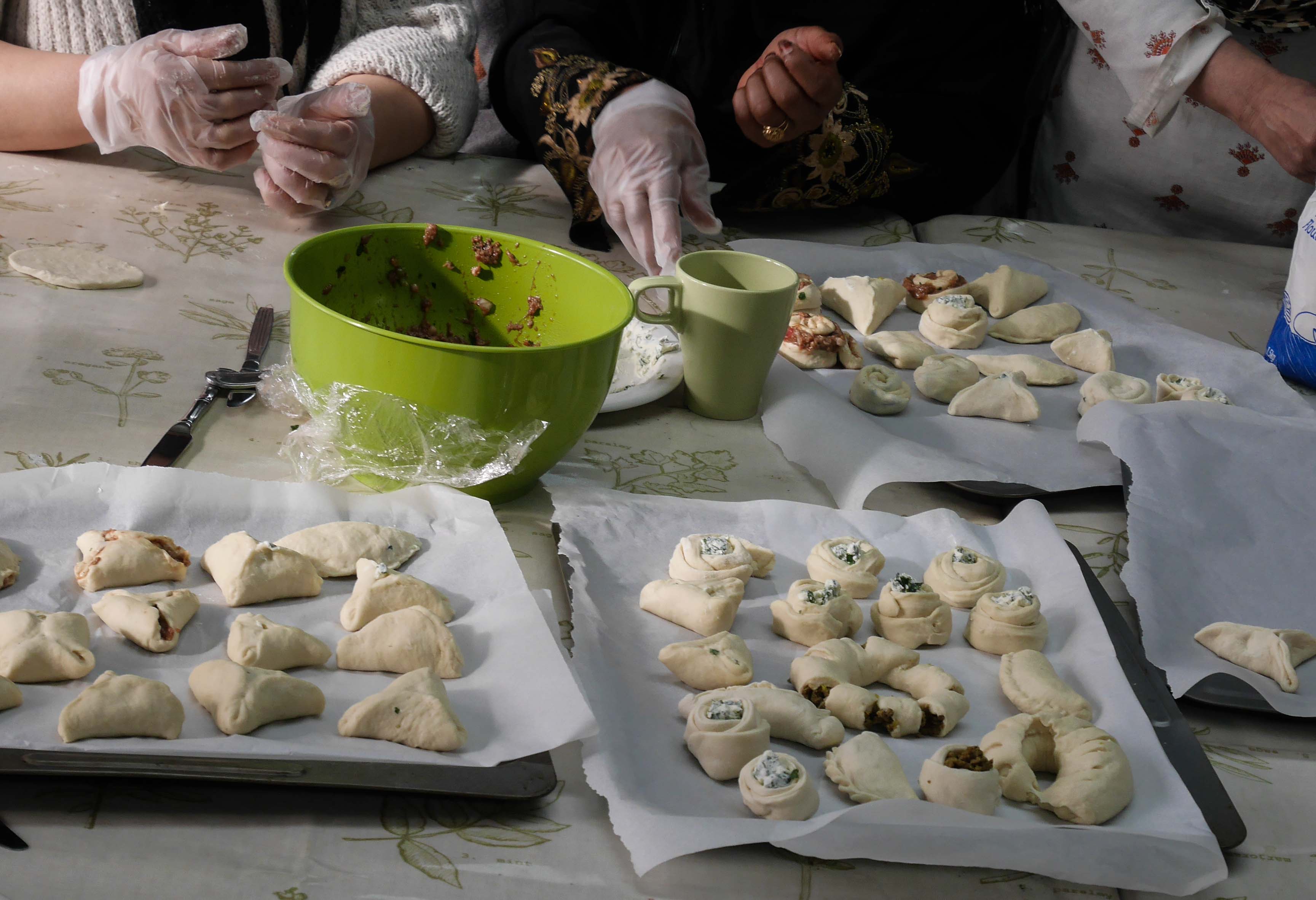 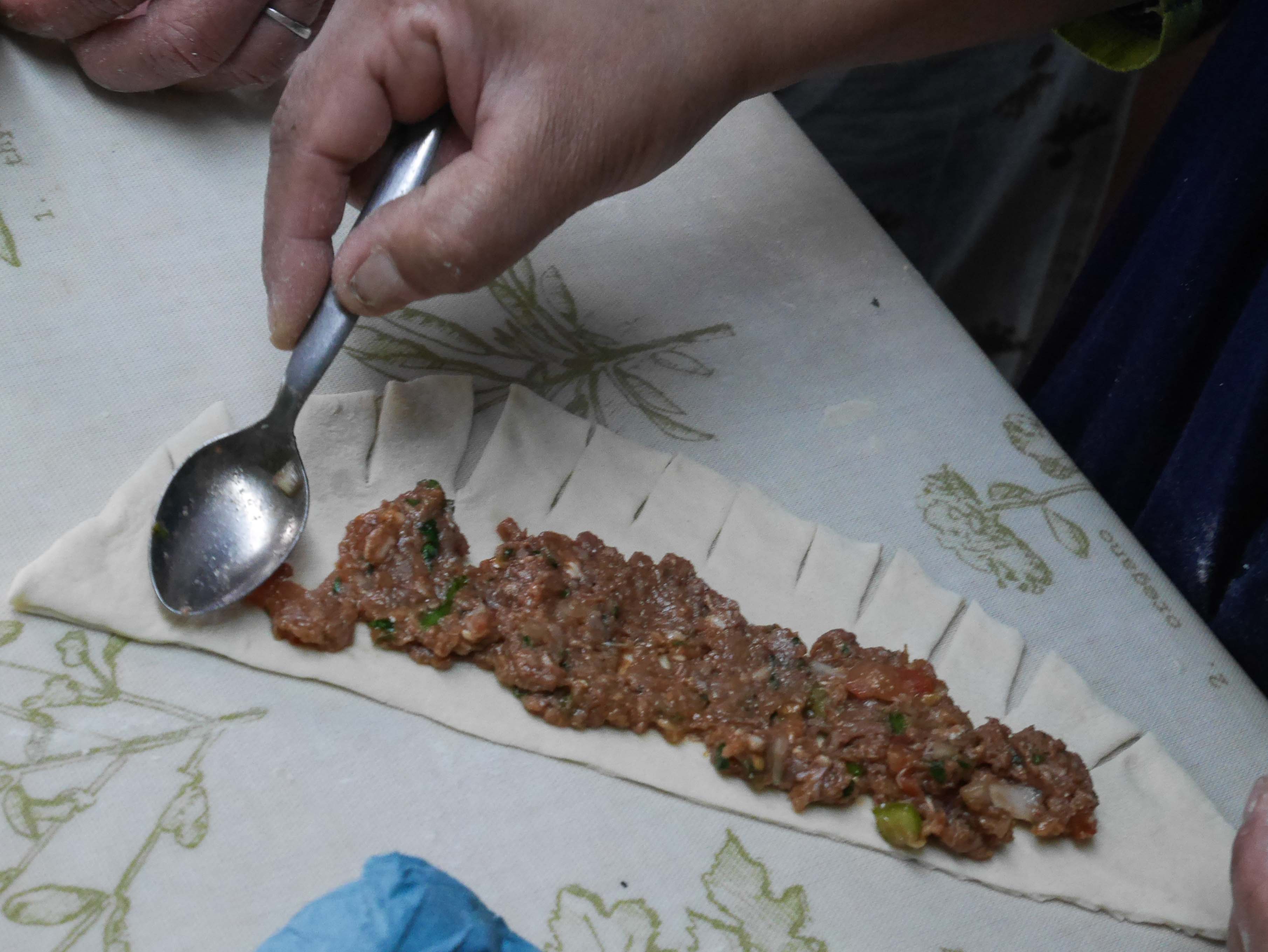 A quick egg glaze and then off to be baked whilst we cleaned up. 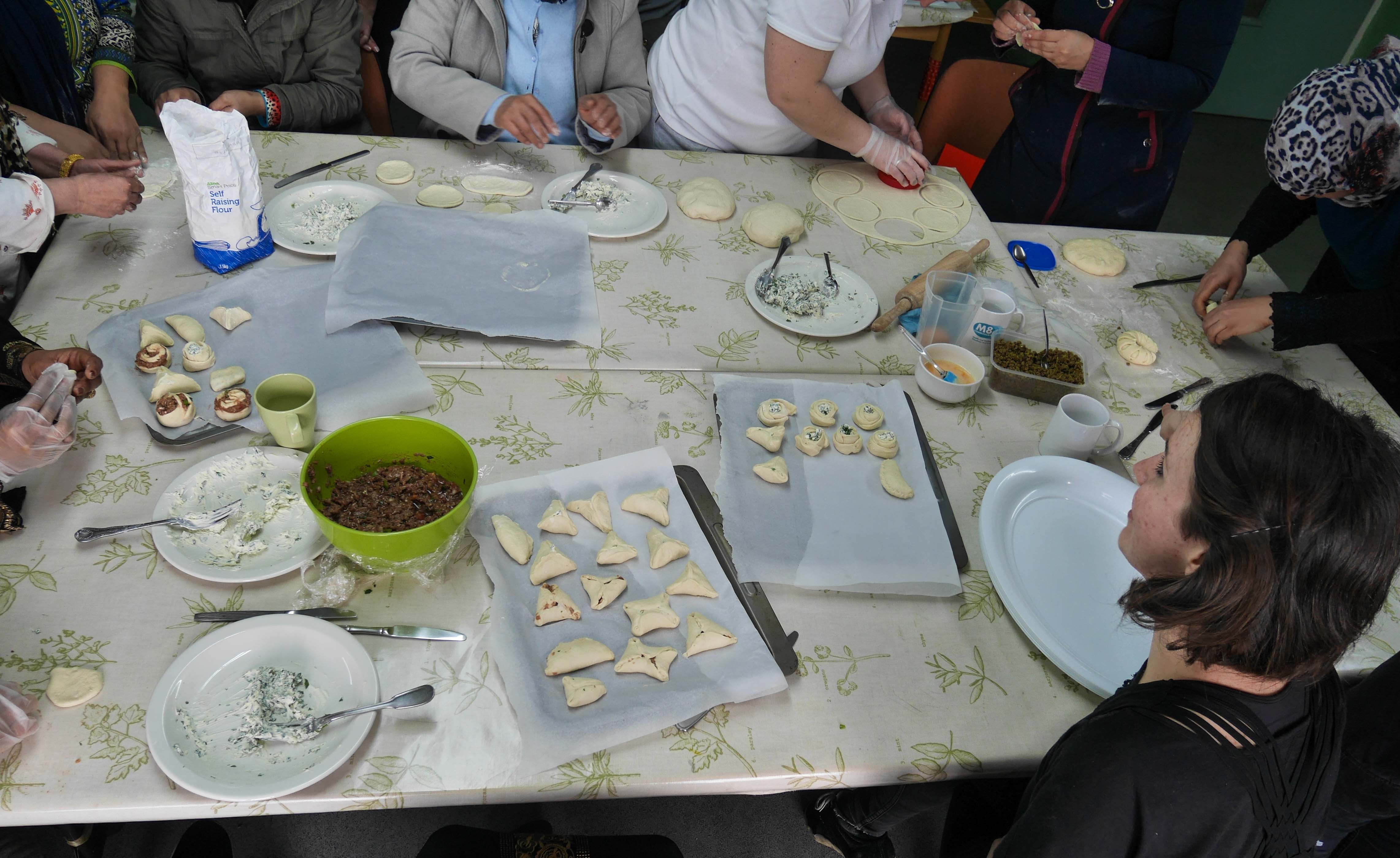 After we had finished, we had a few problems with a temperamental oven which meant that it took almost double the time to bake the pastries. The women didn’t seem to mind so we took the opportunity to do a gap fill activity to squeeze in a bit more English. The women were given the recipe with the quantities of the ingredients removed. They then had to fill in the numbers and measurements from memory. It did get a bit competitive. 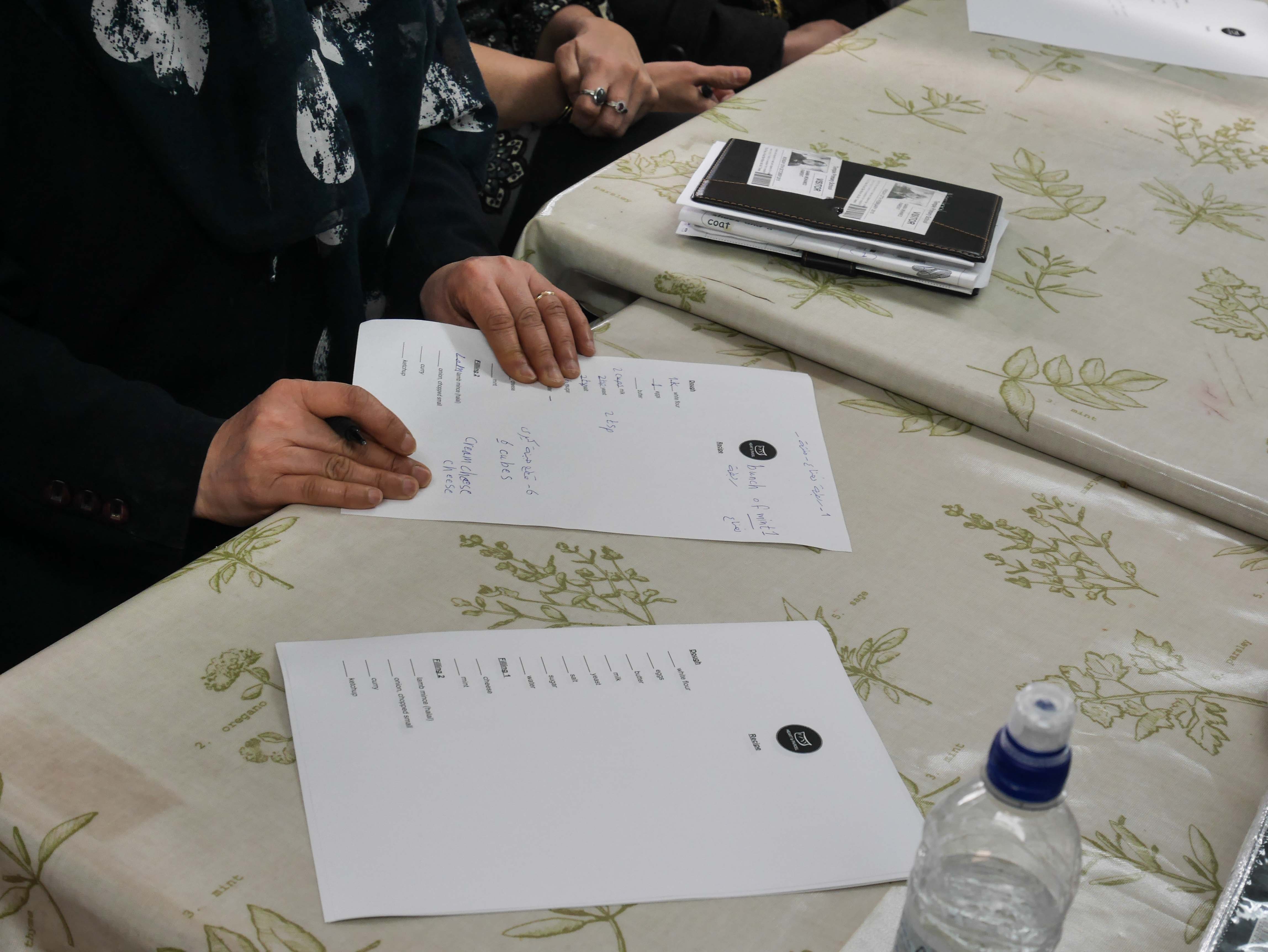 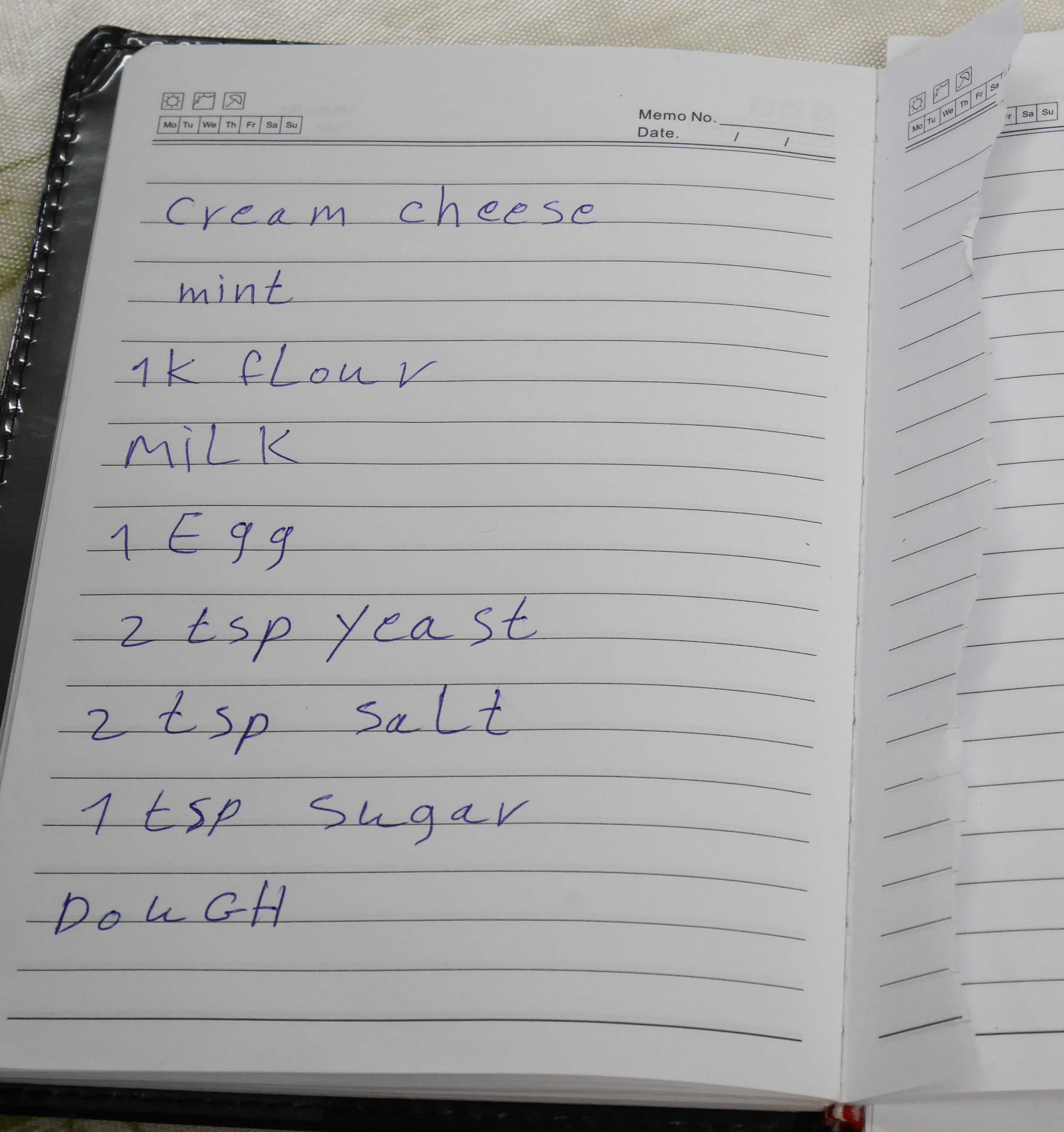 We wanted Aghareed and Sanaa to feel proud of planning and leading the session. We made them certificates as a way of showing our appreciation and respect for being able to facilitate the session through the medium of English.  These women recently arrived from Baghdad in Iraq where there are still many many problems carried over from the civil war in 2008. Coupled with aggravation from the war in neighbouring Syria, many parts of Iraq are just not safe to live in at the moment for citizens. While Sanaa has spoken openly about the news in her country and her feelings of moving reluctantly away to start a new life here, Aghareed has tended to stay quiet as a way of dealing with her situation. She throws herself into English books and studying, grasping the complexities of the language. Sanaa’s biggest frustration is feeling restricted by her language here. She wants to talk, to vent her stress but without English she feels locked in. She cries a lot at the moment she tells Clare, but her husband, who is studying for a PHD here is caring and supportive, and they often go for walks to talk over their worries. Both Aghareed and Sanaa are very hard on themselves for not knowing the English language. They were so ashamed when we first met, thinking they would not be allowed in class because they truly believed their English was terrible. At that moment, these ladies had been here just five months. Out of all the sessions, we enjoyed this one in a completely different way. We were able to take a step back, allowing others to take the reigns and guide the folding from start to finish. We found we both immersed ourselves into the group this time as our hands were free from managing the session. We were also able to really experience the fun moments and chat with women who had been coming regularly, both for the sessions and the other ESOL classes at the Welcome centre.
Overall, a very successful session which left us feeling as we imagined we would when we first created this project just four months ago. We are currently in the process of negotiating kitchen space to run some more sessions in Levenshulme which is our local area, but we will of course continue working with the women we have gotten to know up in North Manchester, as we think this is only the beginning of something much greater.
Special thanks to the Welcome Centre, Joanna, Collette, Yasmin, Mark and to our hard-working volunteers, Marta and Nola for supporting us through the sessions.
To Aghareed and Sanaa, we are so happy to have met you. Thank you so much for your time, effort and positivity.